Rasa - Question: Which Persian Gulf littoral state shares all of President Trump’s views on international terrorism, the so-called danger of Russian advance, the hypocrisy of the United Nations, the unreliability of Europe, the perfidy of the Muslim world, the need to contain Iran, and the need to destroy Yemen in order to save it? 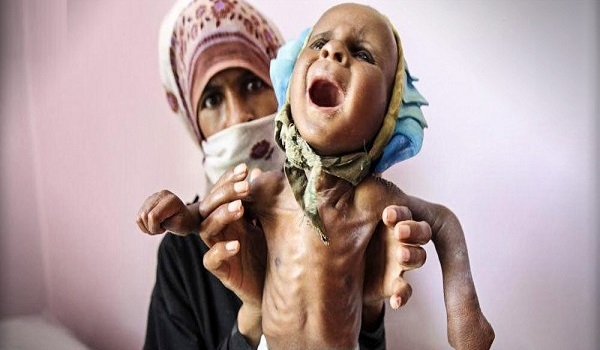 RNA - Question: Which Persian Gulf littoral state is Donald Trump trying, with the help of the Military-Industrial Complex, to re-arm that the Obama administration denied to them on human rights grounds, with a shipment that contains bombs and weapons guidance systems worth billions of dollars that would allow to target marriage parties, funeral halls, marketplaces, town squares, schools, and hospitals in the south west corner of the Arabian Peninsula?

If you answered 'Saudi Arabia' to both of the above, you know more about International Law, political and international irony than the sitting president at the White House. You also know full well that from the very moment of its birth, the United Nations was a microcosm of West-East spying and double standards. Just as with the founding conference, the United States pushed hard to locate the organization on American soil, largely to keep it under its radar and interests, and to accommodate the eavesdroppers and codebreakers of NSA and its predecessors.

So when you hear that three UN agencies have launched an emergency food aid appeal, claiming they want to avert a humanitarian catastrophe in war-torn Yemen, don’t get excited. That country has been under siege by the US and Saudi Arabia for two years while the UN continues to sit on its hands and publish pathetic statements. Be that as it may, the criminal hordes prevent any trade of food and basic goods, let alone emergency food assistance, starving a country that previously relied on imports for 90 percent of its food.

Clearly, it’s a waste of time for the UN Food and Agriculture Organization, the UN Children's Fund, and the World Food Program to issue a joint statement that says more than two-thirds of Yemenis are struggling to feed themselves under an incessant barrage of bombs being dropped by US-backed Saudi warplanes. As previously, the regime changers will never allow any emergency food assistance to reach Yemen, where the UN says the number of food insecure people has risen by three million during the past seven months, reaching an estimated 17.1 million people and exceeding two-thirds of the entire population of 27.4 million.

To verify on that, President Trump says he has every intention to make the situation worse. All signs are that Yemen is in for more suffering at Trump’s hands. He evokes America’s sins and blurts out the truth about Washington’s "bloody hands". His Defense Department is reportedly considering a proposal to designate Yemen a formal battlefield in the bogus War on Terror, which would allow for an “intensified pace of operations, rather than on-off raids or drone strikes.”

As the war grinds on and civilian casualties mount, the Trump administration must answer for its support for the Saudi campaign at the UN, which is prolonging the conflict. Even if Saudi Arabia balks at ending its airstrikes, it can’t keep up the war without US weaponry, intelligence, and logistical help. The Trump administration can stop this bloodshed.

As for the UN, the suffering in Yemen will not stop unless the world body stops supporting Saudi Arabia with top seats at the Human Rights Council and tacit consent. Yemen needs more than joint statements and emergency food aid appeals. UN statements need to follow with actions and aid has to reach the Yemenis now, not tomorrow, not a month from now.

This entire war has gone by without much comment and resolution at the Security Council. In fact, the opposite has happened as Saudi Arabia’s depleted stores of munitions have been hastily replenished by permanent members France, the UK and the US. These past months - despite evidence that these weapons have been used to massacre civilians - they have continued to supply Saudi Arabia with arms.

True, hushed conversations have taken place at the Security Council about calls for a ceasefire, but there has not been an outcry since the US provides diplomatic cover to Saudi Arabia. It was only after a funeral massacre that the UK circulated a draft resolution calling for an immediate ceasefire and for the delivery of humanitarian aid to Yemen. Yet, at no point has the UK even suggested an arms embargo. Quite the contrary, after a recent meeting between Prime Minister Theresa May and Saudi officials, UK arms manufacturers have begun talks with Riyadh to sign more arms deals worth tens of billions of dollars.

In these difficult times, the people of Yemen should realize that no one is going to help them if they don’t help themselves. America’s aggression which began with Obama will continue under Trump and then will be extended to the next administration. Imperial Washington has flat-out gone mad in its delusional self-righteousness and ridiculous claims that the wanton destruction inflicted on Yemen by current US policy is justified.

The best way to not feel hopeless is for the Yemenis to reduce themselves to unity, stand up against foreign aggressors, and defend their country. They are on a higher moral ground. They should never wait for good things to happen to them at the Security Council. The Council will never put pressure on Riyadh to back down. No such pressure will come from the West either.

There is now almost no hope of a UN-brokered agreement, as the Saudis and their Western allies will never agree to give the Yemeni people anything. If people continue to resist, they will fill their country with hope, they will fill themselves with hope, and they will ultimately defeat the warmongers. The West’s automatic military support and UN’s deliberate complicity in one of the worst and least noticed crimes against humanity in the 21st century suggest that an end to this intractable war can only come with the appearance of victory for Yemen. This is possible.

Tags: Yemen UN Saudi
Short Link rasanews.ir/201nA5
Share
0
Please type in your comments in English.
The comments that contain insults or libel to individuals, ethnicities, or contradictions with the laws of the country and religious teachings will not be disclosed