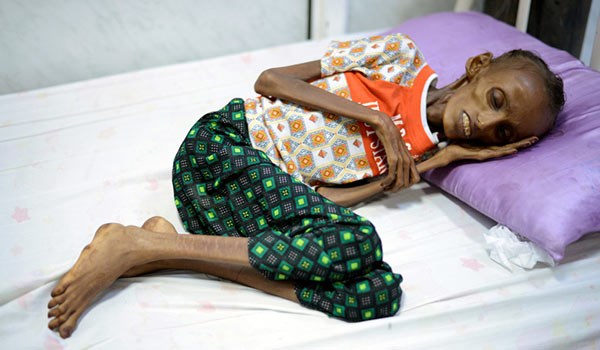 RNA - An assessment by the UN’s agencies for food and for children, FAO and UNICEF, and the World Food Programme, found “unprecedented” levels of hunger with the number of people who could not be sure of having enough to eat up by three million in seven months, hindustan times reported.

A total of 17.1 million people are now struggling to feed themselves with 7.3 million of those in need of emergency assistance. Yemen has a population of 27.4 million.

According to the assessment, the rates of acute malnutrition are found to have crossed the “critical” threshold in at least four provinces of Abyan, Hudaydah, Hadhramaut and Ta'iz, while agricultural production, as the “main source” of livelihood for the majority of the population, is falling across the country.

“The speed at which the situation is deteriorating and the huge jump in food insecure people is extremely worrying,” FAO’s representative in Yemen, Salah Hajj Hassan, cautioned.

“We are witnessing some of the highest numbers of malnutrition amongst children in Yemen in recent times,” Meritxell Relano, UNICEF’s representative in the country said, adding that “Children who are severely and acutely malnourished are 11 times more at risk of death as compared to their healthy peers, if not treated in time".

“The current level of hunger in Yemen is unprecedented," Stephen Anderson, WFP Country Director in Yemen, said, adding that “Tragically, we see more and more families skipping meals or going to bed hungry.”

Tags: Yemen UN Saudi
Short Link rasanews.ir/201nA1
Share
0
Please type in your comments in English.
The comments that contain insults or libel to individuals, ethnicities, or contradictions with the laws of the country and religious teachings will not be disclosed