Rasa - Iraqi security forces have attacked supporters of influential cleric Muqtada al-Sadr, who were holding a protest in the Iraqi capital, Baghdad. 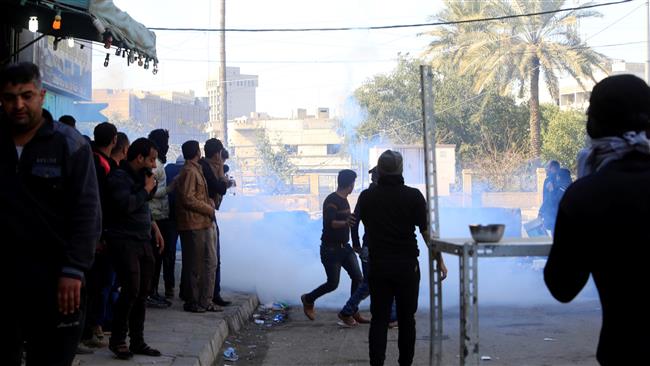 The protest started peacefully with several speakers addressing the large crowd at Tahrir Square but it turned violent after some of the demonstrators attempted to break through a security cordon guarding the main road to the Green Zone.

"The demonstrators tried to cross Jumhuriya Bridge, the security forces fired tear gas to stop them but they insisted," a senior police official said.

Another police official said at least 11 protesters were wounded by rubber-coated bullets or tear gas canisters, but added that the injuries were not serious.

Meanwhile, an Interior Ministry spokesman said that a police officer was killed in the clashes.

Sadr has urged the demonstrators to hold a sit-in in the zone while Prime Minister Haider al-Abadi has called on the protesters to remain peaceful and to "abide by the law."

Sadr’s supporters were demonstrating to urge the government to amend the country’s electoral law. They argue that the country’s current electoral rules are tailored in favor of Iraq’s major parties, which they say are involved in nepotism and corruption.

Last year, hundreds of anti-government protesters broke into the Green Zone and scaled down the walls of parliament after lawmakers failed to approve a new government.

Tags: Sadr Iraq Baghdad
Short Link rasanews.ir/201n9y
Share
0
Please type in your comments in English.
The comments that contain insults or libel to individuals, ethnicities, or contradictions with the laws of the country and religious teachings will not be disclosed