Rasa - A Palestinian held in Israeli custody succumbed to his wounds on Friday after being shot by Israeli forces in Nov. for allegedly attempting to carry out a stabbing attack. 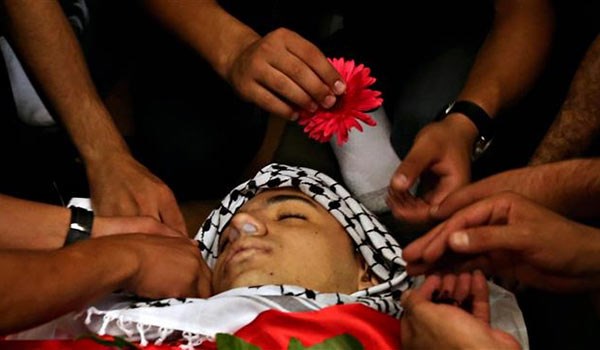 RNA - 24-year-old Muhammad al-Jallad (also reported as Muhammad Amr) died in Israeli custody while at the Beilinson Hospital in the city of Petah Tikva in central Israel, Issa Qaraqe, the head of the Palestinian Committee of Prisoners’ Affairs, told Ma’an.

Qaraqe said that Al-Jallad was shot by Israeli forces on Nov. 9, 2016 at the Huwwara military checkpoint in the Southern part of the occupied West Bank district of Nablus.

Israeli authorities claimed that al-Jallad had attempted to stab an Israeli soldier with a screwdriver before Israeli forces opened live fire on him.

According to Qaraqe, Israeli forces took al-Jallad into custody at the time and transported him to Beilinson hospital for treatment.

Qaraqe added that al-Jallad had also suffered from lymphoma.

Al-Jallad became the ninth Palestinian to be killed by Israeli forces this year, with 112 Palestinians killed in 2016, according to Ma’an documentation.

Israel has come under repeated criticism for using lethal force on Palestinians when they pose no harm or they could be detained through nonlethal means, with the PLO labeling the deaths "extrajudicial executions."

Israeli rights group B'Tselem has condemned Israeli officials for effectively condoning the killing of Palestinians by Israeli forces and civilians.

Tags: Palestinian Israel
Short Link rasanews.ir/201n9x
Share
0
Please type in your comments in English.
The comments that contain insults or libel to individuals, ethnicities, or contradictions with the laws of the country and religious teachings will not be disclosed