Rasa - Members of the Islamic Movement in Nigeria staged another protest in Kaduna, calling on the Acting President Prof Yemi Osinbajo to obey a court order and release their leader, Sheikh Ibrahim Zakzaky. 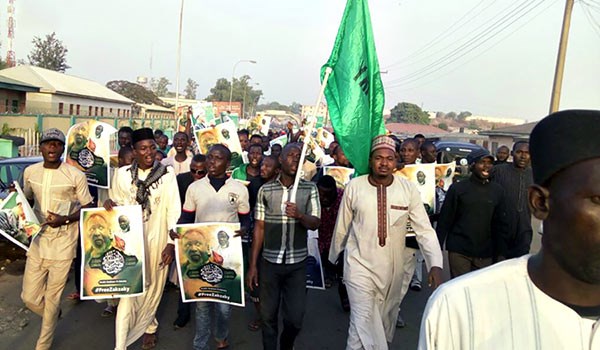 RNA - Meanwhile, men of the Nigeria Police who were obviously on alert quickly moved to the scene and dispersed the protesters, Thenationonlineng reported.

The Kaduna State Government had banned protest in the state considering the security challenges in the state.

The protesters carrying posters of Sheikh Ibraheem Zakzaky with inscriptions "freeZakzaky" on them called on the Acting President, Professor Yemi Osinbajo to set a good precedence by obeying the court order in his position as a professor and a SAN by releasing Zakzaky.

The leader of the protesters, Sheikh Qasim Umar, in his speech quickly delivered before the arrival of the police, said the Islamic Movement in Nigeria is the most oppressed community in recent Nigerian history.

Tags: Zakzaky Nigeria
Short Link rasanews.ir/201n9w
Share
0
Please type in your comments in English.
The comments that contain insults or libel to individuals, ethnicities, or contradictions with the laws of the country and religious teachings will not be disclosed