Rasa - Saudi Crown Prince Mohammed bin Naif, deputy premier and minister of interior, has been awarded a CIA honor in recognition of his efforts to fight terrorism. 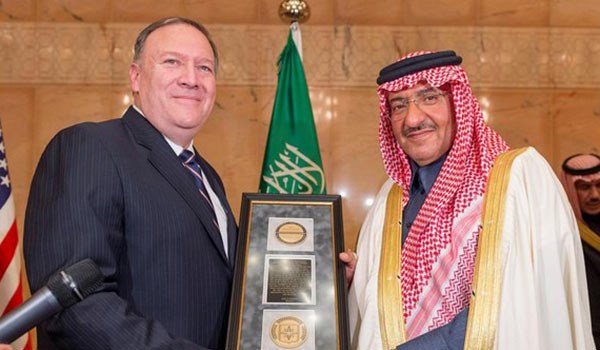 It was granted in recognition of distinguished intelligence work in the fight against terrorism and the crown prince’s contributions toward security and peace.

According to presstv, Deputy Crown Prince Muhammad Bin Salman, second deputy premier and minister of defense, and several other senior Saudi officials were also in attendance.

In a statement after receiving the medal, Nayef said he appreciated the CIA honor and framed it as a recognition of what he called Saudi Arabia’s anti-terrorism efforts under the directives of King Salman bin Abdulaziz Al Saud.

“Saudi Arabia rejects and denounces strongly terrorism in all its forms and manifestations,” the crown prince was quoted as saying by the Saudi media.

“The kingdom has been keen to combat terrorism based on its conviction that terrorism has no identity and no religion, and from its belief that the terrorists are committing these acts stemming from their deviant ideologies and evil thought,” he added.

This is while Saudi Arabia, where Wahhabism is widely preached and practiced, stands accused of supporting terrorist groups fighting the Syrian government since 2011.

Tags: CIA Terror Saudi
Short Link rasanews.ir/201n9v
Share
0
Please type in your comments in English.
The comments that contain insults or libel to individuals, ethnicities, or contradictions with the laws of the country and religious teachings will not be disclosed