Saudis Reactivating Al-Qaeda in Yemen for Deeper US Meddling

Rasa - The Saudi regime is exploring various options, including reactivating al-Qaeda, in its so-called Operation Golden Spear which aims to take control of Bab al Mandab Strait and pus the US to get involved directly in the conflict. 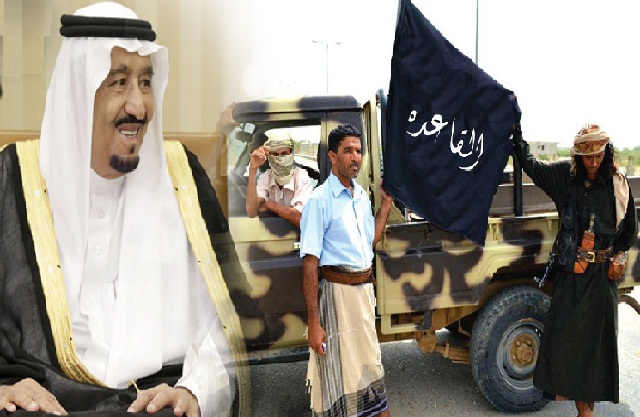 RNA - The Saudi regime is exploring various options, including reactivating al-Qaeda, in its so-called Operation Golden Spear which aims to take control of Bab al Mandab Strait and pus the US to get involved directly in the conflict.

This very strategic water way, located between Yemen and the Horn of Africa, is vital to oil and global trade and currently is under the control of Yemeni Army and Ansarullah forces. This situation continues to agitate Saudis who failed to control this strait despite two years of continuous bombardment of the impoverished state.

The battle for the control of Bab al Mandab Strait continued as reports indicate the Yemeni army and popular forces repelled an attempt by the Saudi aggression forces to move towards Mocha city in Taiz province overnight.

Military officials said on Wednesday that the invaders and their mercenaries, including elements of al-Qaeda and ISIS and Sudanese troops, were killed and 11 military vehicles were destroyed during the confrontations.

The botched attack lasted from Tuesday morning to evening under intensive sorties of the aggression warplanes, which exceeded 60 raids, in addition to the bombardment of Apache helicopters and battleships.

Therefore, by activating notorious al-Qaeda terrorist network in the region, the Saudis hope to use this pretext to allow full US interference in the region under the guise of the so-called war on terror. It is no longer a secret that the CIA, working closely with Saudi Arabia, created al-Qaeda in the 1980′s and continue to exert control over this terrorist group and its activities. Operatives of this group might not necessarily be aware they are working the CIA and other intelligence agencies which channel their orders through the Saudi regime's spy agencies.

It is against this backdrop that over the recent days, the US says it attacked an al-Qaeda compound in Yemen, the first US military combat death under Donald Trump. US defense officials claim they were targeting al-Qaeda in the Arabian Peninsula (AQAP) leader Qassim al-Rimi but he was not killed in the operation which claimed the lives of at least 23 civilians. Al-Rimi issued a statement claiming "dozens of Americans were killed and wounded, in the January 29 operation. Among the civilians killed in the strike was Nawar Anwar Al-Awlaki, the 8-year-old daughter of former AQAP leader Anwar al-Awlaki, who was also killed in an alleged US drone attack in 2011".

This deliberate Saudi reactivation of al-Qaeda is being carried out with the knowledge of officials in Washington who are using the pretext of the presence of this group to directly intervene in the Yemen conflict. The so-called war on al-Qaeda by the new Trump administration is actually an operation to rescue the Saudi regime from the Yemen quagmire after two years of unabated bombardment of the country.

US interference in Yemen comes amid reports by Human Rights Watch that the US may be complicit in atrocities that are taking place in Yemen as part of the Saudi-led military operation. The New York-based human rights activist group said last December that the Saudi regime used US weapons in “unlawful attacks,” including “the two of the war’s deadliest incidents.”

Tags: US Yemen Saudi Al-Qaeda
Short Link rasanews.ir/201n9g
Share
0
Please type in your comments in English.
The comments that contain insults or libel to individuals, ethnicities, or contradictions with the laws of the country and religious teachings will not be disclosed