Rasa - Letters between British foreign secretary and the trade secretary revealed that Boris Johnson pressed Liam Fox to continue exports of weapons to Saudi Arabia after the bombing of a funeral in Yemen last October that killed over 140 people and was condemned by UN monitors. 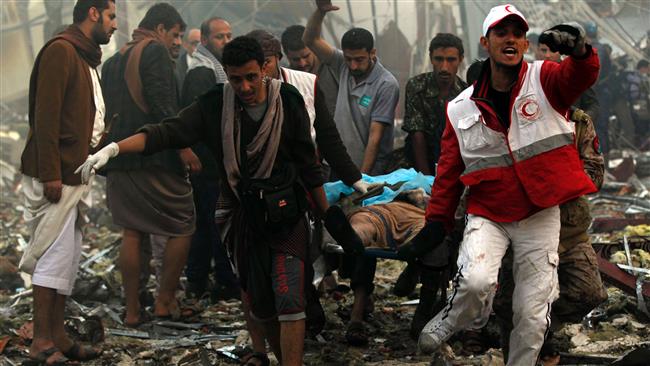 RNA - Correspondence between the ministers shows that a month after the strike, Johnson, the foreign secretary, wrote: “I am aware you have deferred a decision on four export license applications to supply the Royal Saudi Air Force with equipment which could be used in the conflict in Yemen.”

In the letter dated 8 November, Johnson advised the trade secretary it was right to proceed with the arms sales.

“The issue is extremely finely balanced, but I judge at present the Saudis appear committed both to improving processes and to taking action to address failures/individual incidents,” he said, The Guardian reported.

The foreign secretary added that the Saudis had given the UK commitments in the aftermath of the airstrike on the funeral in Sana’a that meant “the ‘clear risk’ threshold for refusal … has not yet been reached”.

Fox then recommended that the licenses be approved in the light of the assessment provided by the foreign secretary, but in his reply dated 17 November added that the situation remained risky and that he “must insist” on regular updates on the situation in Yemen.

The trade secretary wrote to Johnson: “I agree that this is an extremely complex situation and that the issue of clear risk is extremely finely balanced. In the light of your assessment and [REDACTED] recent advice I accept that we should continue, for the present, to assess export licenses for Saudi Arabia on a case-by-case basis.”

But he added: “In doing so I want to be very clear with you about the risks inherent in making this decision, not just because of the grave situation in Yemen.”

The letters were among documents disclosed in court proceedings this week, as Campaign against the Arms Trade faced the government in a judicial review of the decision to continue licensing arms exports to Saudi Arabia despite the kingdom’s widely criticized offensive in Yemen.

The 8 October airstrike on the funeral in the Yemeni capital was among the bloodiest incidents in a conflict that has cost the lives of at least 4,600 civilians, according to the UN.

A hall was bombed as a funeral was taking place, with hundreds of people present. Minutes later, as people tried to help the wounded, a second airstrike hit in a “double-tap”, killing further people, including rescuers.

A UN report seen by Reuters found that 140 people were killed and hundreds more injured, and that the attack had breached international humanitarian law. The coalition acknowledged it had mistakenly targeted the funeral based on incorrect information.

Fox delayed signing off on further weapons exports to the Saudi air force following the strike, the correspondence suggested.

The government’s top export official, Edward Bell, wrote on 28 October that his department was consulting the Foreign Office to see whether there was a clear risk exports could be used to break the laws of war. He added: “We are making contingencies should licensing policy change.”

Under UK export rules, licenses should not be approved if there is a clear risk the weapons could be used for serious violations of international humanitarian law.

Saudi Arabia is Britain’s most important weapons client: the government has signed off sales of more than £3.3bn since March 2015, when the kingdom led a coalition of Middle Eastern countries in an attempt to push Houthi rebels out of the Yemeni capital.

Johnson visited Saudi Arabia in December, days after an embarrassing row when comments he had made about the kingdom engaging in “proxy wars” in the Middle East surfaced.

He wrote to Fox that he was able to discuss these issues at first hand with the Saudi leadership, and noted an “encouraging positive trend” to reduce the risks of serious breaches of IHL. He therefore recommended that sales should continue, even though the US had recently blocked a sale of precision-guided munitions to the country.

A spokesman for the UK government said: “The UK is playing a leading role in work to find a political solution to the conflict in Yemen and to address the humanitarian crisis. We operate one of the most robust export control regimes in the world and keep our defense exports to Saudi Arabia under careful and continual review. Given the current legal proceedings we will not be commenting further outside of court at this stage.”

Documents disclosed on Tuesday revealed that earlier in the year, Bell had advised then-business secretary Sajid Javid: “My gut tells me we should suspend,” the court heard.

Javid wrote to the then-foreign secretary Philip Hammond and defense secretary Michael Fallon that he intended to continue granting licenses, adding: “I would like your agreement that this is the right policy for us to pursue at the present.”

Half of the court case is being heard in secret as the government wants to rely on sensitive material that it says would damage national security if heard in open court. The secret hearings conclude on Friday.

Tags: Yemen UK Saudi
Short Link rasanews.ir/201n9b
Share
0
Please type in your comments in English.
The comments that contain insults or libel to individuals, ethnicities, or contradictions with the laws of the country and religious teachings will not be disclosed