Iranians Urge Islamic Republic Officials to Stand Strong Against US

Rasa - Millions of people taking part in the February 10th rallies marking the 38th anniversary of the victory of the Islamic Revolution urged officials in Tehran to stand tough against Washington's continued bullying approach and speed up growth of the country's missile industries. 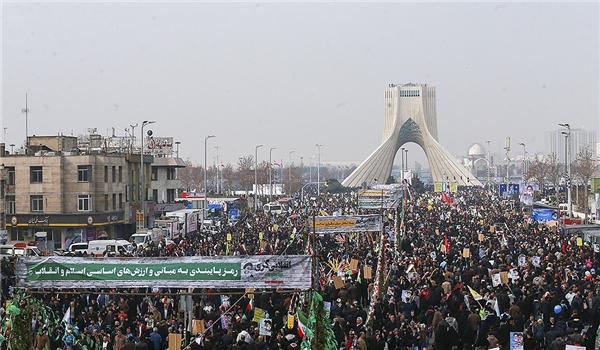 RNA - Ralliers underlined in a final statement that Iran's security is no issue for compromise and should, hence, never be included in any talks, adding that enhancement of the country's missile power that "is a symbol of its deterrent power" as well as national security and development of defense programs are an indispensable part of the Iranian people's rights on the basis of the international law and the UN Charter.

The 13-paragraph statement also reiterated that the "revolutionary Iranian nation is distrustful of the bullying powers, with the criminal US at their top," and voiced the Iranian people's outrage and protest at the US defiance and violation of its undertakings under the Joint Comprehensive Plan of Action (JCPOA also known as the nuclear deal).

The statement further condemned "White House attempts to impose fresh sanctions and promote Islamophobia and Iranophobia", demanding the state officials and parliament members to adopt resolute stances to "reciprocate" the violation of the nuclear deal and the aforementioned attempts through "brave actions".

The demonstrators also laid emphasis on the territorial integrity and sovereignty of Syria, Yemen, Iraq and other regional nations as a major contributor to sustainable security and peace, and further condemned the actions made by the global arrogance - a term referring to the US and its major Western allies - and its affiliated reactionary states to threaten the national security of the regional states through stirring tension and instability.

The demonstrators further voiced support for the Palestinian cause and the Islamic Resistance Front against the apartheid, oppression, siege, occupation and aggressions made against the Muslims and their rights, including the crimes committed by Israeli regime as well as the House of Saud and the House of Khalifa in Yemen and Bahrain, and stressed that such criminal moves are conducted within the plots hatched by the US, Britain and the Zionist regime and through their support.

They also condemned promotion and spread of violence, radicalism, hatred and terrorism in the world, and said that "any kind of aid and support for the Takfiri terrorist movements would help foment strife among Muslims and would serve the advancement of the aggressive policies of the racist regime of the Zionists".

"Nations' exercise of their right of self-determination is the only way to establish peace and tranquility in the region," the statement added, and urged the Muslim states to stand united for their cause and for the most vital issues of the world of Islam, including Palestine, stressing that resistance is the only way for the oppressed Palestinian nation to restore their usurped rights.

It also asked the worldwide Muslim community to mobilize all its possibilities and capacities to render help and assistance to the oppressed Palestinian nation and combatant groups to enable them liberate their occupied territories. They statement further condemned the attempts made by certain dependent regimes in the region to normalize ties with the Zionist regime, warning that such policies would bring them nothing but ill fame and insecurity.

Millions of Iranians from all walks of life took to the streets and squares all over the country to express their support for the cause, aspirations and ideals of the Islamic Revolution.

In addition to the annual theme of renewing support for the revolution and Islamic establishment, this year ralliers are also due to express solidarity with the regional nations' revolution against their tyrant rulers as well as their campaign against Takfiri terrorism.

Yet, what has made this year's rallies even more important is the call by the Iranian Supreme Leader, Ayatollah Seyed Ali Khamenei, on people to give a crushing response to the recent threats of US President Donald Trump by staging massive rallies even larger than ever.

Trump claimed on Sunday that Iran “lost respect” for the US in the wake of the 2015 nuclear deal signed between Tehran and the world powers, and that it now feels “emboldened” by the agreement.

He repeated Obama's catch-phrase "all options are still on the table" to imply that the threat of the adoption of military action against Iran is still alive, but a day later the US president took back his word, stressing that he did not mean to threaten Tehran militarily.

The rallies this year are covered by over 3,250 reporters and photojournalists, including more than 250 from other countries.

The final collapse of the Shah's regime came on February 10 when the military renounced its loyalty to the Shah and joined the revolutionary forces.

On this day 38 years ago, people took to the streets to celebrate the collapse of the Pahlavi Dynasty and the emergence of the new era.

Tags: Iran JCPOA Islamophobia Imam Khomeini
Short Link rasanews.ir/201n9T
Share
0
Please type in your comments in English.
The comments that contain insults or libel to individuals, ethnicities, or contradictions with the laws of the country and religious teachings will not be disclosed