Trump 'thinking seriously' about moving US embassy to Israel to Jerusalem

Rasa - US President Donald Trump says he is "thinking seriously" about moving the country’s embassy in Israel from Tel Aviv to Jerusalem al-Quds. 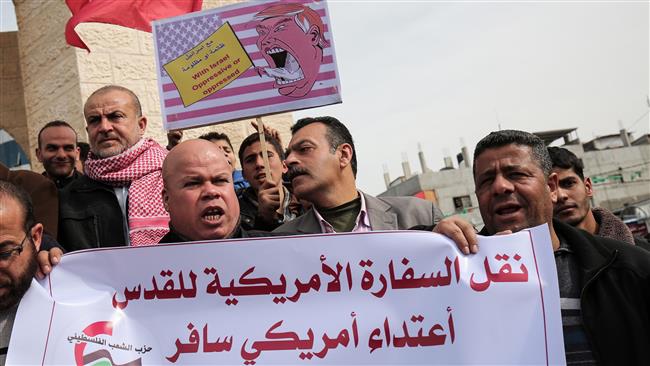 RNA - In an interview with Israeli newspaper Israel Hayom, published on Friday, Trump made the remarks that he is studying the plan and stressed that it is not an easy decision to make.

The planned relocation of the American embassy to al-Quds remains a controversial issue and it has sparked fears of a renewed outbreak of violence across the Middle East.

Palestinians oppose the move and have repeatedly warned Trump against such an action. Also, the Palestine Liberation Organization warned the US against the relocation of the embassy. The organization emphasized, the potential relocation would deliver a death blow to any prospects of the resolution of the Palestinian-Israeli conflict and fuel extremism in the region.

Trump's rise has emboldened Israeli extremists to implement their illegal policies and further the occupational agenda.

In early December, then US President Barack Obama renewed a presidential waiver ordering the US embassy in Israel to remain in Tel Aviv, despite pressure by Congress and Israel not to do so.

In September, Trump, who was the Republican presidential nominee at the time, promised Israeli Prime Minister Benjamin Netanyahu that he would recognize Jerusalem al-Quds as Israel’s undivided capital if he emerged triumphant in the US presidential election.

Palestinians are seeking to create an independent state in the territories of the West Bank, East Jerusalem al-Quds and the Gaza Strip, with East al-Quds as its capital.

The new US president has also signaled that the United States, under his administration, would be far more tolerant of the illegal Israeli settlement construction.

Over 230 illegal settlements have been constructed since the 1967 Israeli occupation of the Palestinian territories. The unauthorized structures have hampered attempts to establish peace in the Middle East.

Tags: US Embassy Israel
Short Link rasanews.ir/201n9M
Share
0
Please type in your comments in English.
The comments that contain insults or libel to individuals, ethnicities, or contradictions with the laws of the country and religious teachings will not be disclosed