Rasa - A Bahraini rights group says the regime in Manama detained 1,300 anti-regime protesters and activists in 2016, as people in the kingdom prepare to mark the anniversary of their uprising against the ruling Al Khalifah family. 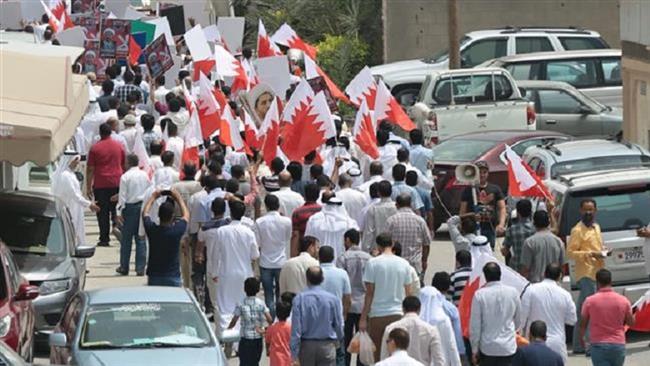 RNA - According to a report released by the Bahrain Center for Human Rights (BCHR) on Thursday, there were 187 children among those arrested by regime forces last year.

In 2016, the Bahraini judiciary issued 91 life sentences and four death penalties, while the citizenship of 204 people was revoked, the BCHR said.

According to the report, Bahraini people staged 1,523 protest rallies across the sheikhdom during the period.

The report comes as the country prepares to mark the sixth anniversary of the anti-regime uprising in February 14, 2011.

Ahead of the anniversary, a group of opposition activists have issued a statement, calling for a high turnout of people in anti-regime protests to mark the occasion.

The statement pointed to the Thursday killing of three pro-democracy activists by Manama regime forces and called on the nation to actively participate in the their funeral procession on February 14.

On Thursday evening, protesters took to the streets across Bahrain, chanting slogans in protest at the deaths of 29-year-old Rida al-Ghisra, Mahmoud Yahya, 22, and 35-year-old Mostafa Abedali, whom regime forces shot dead off Khalifah Bin Salman Port, east of the capital Manama, at dawn.

Thousands of anti-regime protesters have held demonstrations in Bahrain on an almost daily basis ever since the popular uprising began in mid-February 2011. They are demanding that the Al Khalifah dynasty relinquish power and let a just system representing all Bahrainis be established.

Tags: Al Khalifah protest bahrain
Short Link rasanews.ir/201n9L
Share
0
Please type in your comments in English.
The comments that contain insults or libel to individuals, ethnicities, or contradictions with the laws of the country and religious teachings will not be disclosed