Rasa - Israeli forces violently detained a Palestinian minor off the street in broad daylight, while at least 16 other Palestinians were detained during separate raids across the occupied West Bank and East Jerusalem. 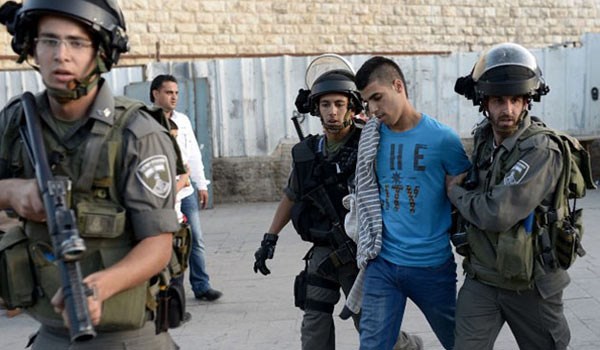 RNA - Local people in Aida refugee camp in the Southern occupied West Bank district of Bethlehem said Israeli forces raided the camp and violently detained a boy in the street as he was walking home from school, Ma'an reported.

A video shared on social media shows Israel soldiers aggressively throwing the boy into the back of a military vehicle.

Witnesses said they saw the military jeep suddenly careen into the camp before soldiers emerged and grabbed Jawarish, asserting that there were no clashes or stone throwing in the area at the time, and that the boy was walking home from school by himself.

Bethlehem-based NGO BADIL identified the boy as 13-year-old Ali Afana, and said that he was beaten by soldiers inside the vehicle.

In a separate raid in Aida, Israeli forces had also delivered a notice to an unidentified Palestinian youth to meet with Israeli intelligence for interrogation, according to locals.

Locals in Aida have reported escalated military procedures over the past several months, creating what some residents have called a perpetual “atmosphere of fear.

”Residents of the camp say that Israeli soldiers intentionally provoke local youth with tear gas or bullets in order to start clashes with the young Palestinians who sometimes throw stones at Rachel’s Tomb.

Last Thursday, hundreds of Israeli soldiers stormed the refugee camp in the predawn hours and detained 12 of its residents, including four minors.

As of Tuesday, the majority of those detained remained in custody, with at least one, Fathi Abu Srour, having been released, according to local sources.

Israeli forces carry out detention raids across the occupied territory on a near-nightly basis, with the UN recording an average of 95 weekly raids in the West Bank in 2016, and 100 weekly raids on average thus far in 2017.

Tags: UN Palestinian Israel
Short Link rasanews.ir/201n9B
Share
0
Please type in your comments in English.
The comments that contain insults or libel to individuals, ethnicities, or contradictions with the laws of the country and religious teachings will not be disclosed