Tide of Syria conflict turning in favor of Damascus, Moscow

Rasa - Syrian President Bashar al-Assad says the tide of events in the Arab country is changing in favor of Damascus and Moscow, which are both engaged in a battle against foreign-backed terrorists. 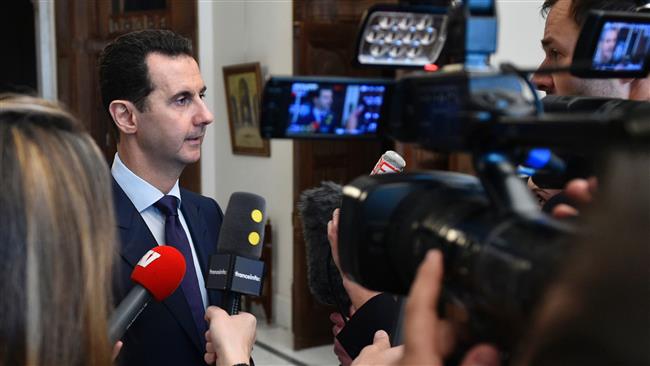 RNA - "Events are moving quickly in the direction which we and you desire," Assad said in a meeting with Russian lawmakers in Damascus on Wednesday.

He further appreciated Russia’s military support for Damascus in its anti-terror fight and the sacrifices made by the Russian forces in the Syrian territory.

“Of course, military support is very important. But even one drop of blood of the Russian soldiers who died in our country is more important for us than any military support,” President Assad said.

Moscow launched its campaign against Daesh and other terror outfits in Syria at Damascus’ request in September 2015. The air cover has helped Syrian forces conduct successful counterterrorism operations.

Syrian army troops and allied fighters have recently made sweeping gains against Takfiri elements, who have been wreaking havoc in the Middle Eastern state since 2011.

Following Wednesday’s meeting, Dmitry Sablin, a member of the defense committee of Russia's State Duma, the lower house of the country's parliament, said the Syrian leader had expressed Damascus’ readiness to hold direct talks with representatives of all opposition groups, including the armed ones.

Meanwhile, referring to last month's Syrian peace talks in the Kazakh capital Astana, Russian lawmaker Sergey Gavrilov noted that President Assad had expressed optimism that the negotiations in the Astana format would be more effective than the planned Geneva format.

"He (Assad) believes that the resumption of talks in Astana… will be more productive not only for the expansion of the local truce, but also for mechanisms of disarmament and political reconciliation through humanitarian mechanisms than the current Geneva format," he said.

The Kazakh capital hosted two days of talks between Damascus and opposition groups, with Iran, Russia and Turkey attending the event as mediators. The trio agreed on the establishment of a mechanism to support the Syria-wide truce that has been in place since December 30.

Syria’s warring sides are expected to resume their discussions in the Swiss city of Geneva on February 20.

Tags: Assad Syria Russia
Short Link rasanews.ir/201n92
Share
0
Please type in your comments in English.
The comments that contain insults or libel to individuals, ethnicities, or contradictions with the laws of the country and religious teachings will not be disclosed