Rasa - Two legal advocacy organizations in the US have accused American immigration officials of repeatedly violating the rights of legal immigrants who were barred from entering the country under President Donald Trump’s travel ban. 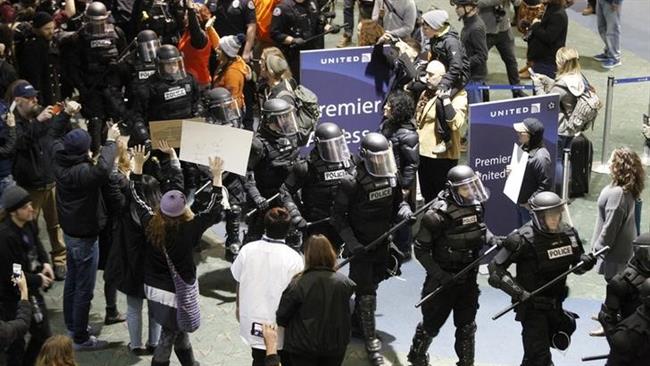 RNA - The Center for Constitutional Rights and the Kathryn O. Greenberg Immigration Justice Clinic filed a complaint on Monday to the Department of Homeland Security, accusing customs and border officials of holding people for hours without food at airports and denying them access to lawyers.

The complaint said some legal immigrants did not know what they were signing, but were threatened with a five-year visa ban if they did not agree to sign.

The two groups described the cases as “systemic abuses and violations” of the immigrants’ rights, saying it was a pattern repeated in US airports around the country after Trump signed the controversial order.

The complaint said some people were held more than 30 hours without having any idea when or how they would be released.

“Lawyers representing these individuals rushed to airports around the nation, but were categorically prohibited from communicating with the individuals detained inside, even when they presented proof of preexisting attorney-client relationships,” it said.

Trump signed an executive order on January 27 that imposed a 90-day travel ban on citizens from Iran, Iraq, Libya, Somalia, Sudan, Syria and Yemen and suspended admission of all refugees for 120 days, while placing an indefinite ban on Syrian refugees.

Last week, US District Judge James Robart, a federal judge in Seattle, Washington, granted a temporary restraining order against Trump’s travel ban. The fate of the order is being decided in courts in a legal battle that could end up in the Supreme Court.

Tags: US Trump
Short Link rasanews.ir/201n8x
Share
0
Please type in your comments in English.
The comments that contain insults or libel to individuals, ethnicities, or contradictions with the laws of the country and religious teachings will not be disclosed