Rasa - Lieutenant Commander of the Islamic Revolution Guards Corps (IRGC) Brigadier General Hossein Salami underlined that the US is growingly losing its power, noting that Washington's assessment of Tehran's tough reaction to any possible aggression discourages the White House from attacking Iran. 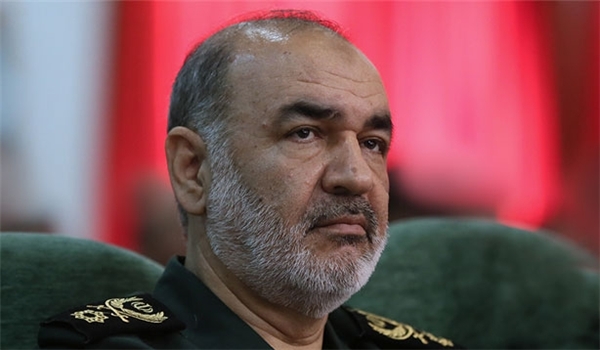 RNA - "The US power is declining given its wrong interfering policies but its threats still continue," General Salami said in an interview with the state-run TV on Tuesday night.

Referring to the US military threats leveled against Iran through the phrase "all options are on the table", he said, "They have never managed to put these threats into action as their assessments of the Islamic Republic of Iran's power of retaliation that are close to reality have warned them that confronting this power would have dangerous consequences for the US interests."

In relevant remarks in December, IRGC Top Commander Major General Mohammad Ali Jafari underlined that many world people feel hate for Washington, and said the US is collapsing.

"Evidence shows that the US is being annihilated and of course, this needs time," General Jafari said, addressing a conference in the Northeastern province of Golestan.

Stressing that the US has shown clear hostility towards Iran, he said, "Those who had doubted this came to realize this fact during the (implementation of) JCPOA (the Joint Comprehensive Plan of Action) and the nuclear agreements."

General Jafari said that the recent polls are showing that most world states consider the US as their enemy.

Tags: US IRGC Iran
Short Link rasanews.ir/201n8g
Share
0
Please type in your comments in English.
The comments that contain insults or libel to individuals, ethnicities, or contradictions with the laws of the country and religious teachings will not be disclosed