US Too Weak to Rally Int'l Support against Iran

Rasa - Iranian President Hassan Rouhani underlined that the US is weaker than ever for rallying international support for its policies across the globe, including action against Iran. 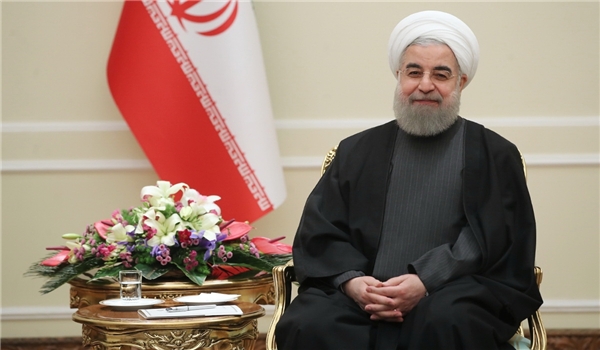 RNA - "The US capability to rally support in the world is less than any other time," President Rouhani said in a meeting with Venezuelan Foreign and Oil Ministers Delcy Rodríguez and Nelson Martinez in Tehran on Wednesday.

Stressing that independence and resistance against the countries which seek unilateralism in the world are among the foreign policy principles of Iran and Venezuela, he said, "The conditions of the world today require independent states, specially the Non-Aligned Movement (NAM) members, to rely on their nations and take unified action against unilateralism, extremism and violence."

Elsewhere, Rouhani underscored his country's enthusiasm for the further expansion and deepening of ties with the Latin American countries, specially Venezuela, in different political, economic and cultural fields.

In relevant remarks in August, Iranian Foreign Minister Mohammad Javad Zarif underlined his country's enthusiasm for the further broadening of relations and cooperation with the Latin American states.

"During the Venezuela visit, we formed a joint committee to settle the problems remaining from the past, specially during the sanctions era," Zarif said.

"We also agreed on establishment of brokering relations" with all six countries to further expand banking ties.

Zarif was accompanied in the Latin America tour by a business delegation of figures from private and public sectors covering fields ranging from petrochemicals, mining, medicine, automobiles to agriculture and engineering.

Tags: US Hassan Rouhani
Short Link rasanews.ir/201n8c
Share
0
Please type in your comments in English.
The comments that contain insults or libel to individuals, ethnicities, or contradictions with the laws of the country and religious teachings will not be disclosed