Rasa - Chairman of the Iranian Parliament's National Security and Foreign Policy Commission Alaeddin Boroujerdi blasted the US for supporting terrorist groups in Syria. 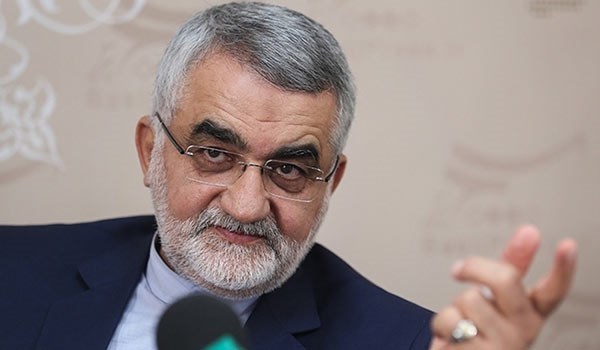 RNA - "The US has made huge mistakes in regional crises, particularly with regard to the Syrian situation," Boroujerdi said in a meeting with German Parliamentarian Johann Wadephul in Tehran on Wednesday.

The senior lawmaker underlined that the Islamic Republic of Iran supports any cooperation, initiative and approach based on a serious and real confrontation with terrorism.

Boroujerdi criticized the non-constructive role of the US in regional crises, particularly in Syria, and said, “Iran believes that the only way to restore stability and peace to the region is through dialogues, cooperation among all Syrian groups without any foreign intervention."

In relevant remarks on Sunday, Boroujerdi blasted the US for imposing fresh sanctions on Iran's economy sector, and said such embargos contradict the contents of the Joint Comprehensive Plan of Action (JCPOA).

"The new sanctions imposed on Iran by the US administration are in violation of the nuclear deal signed in July 2015 between Iran and the six world powers (the US, Russia, China, France, Britain and Germany) also known as the Joint Comprehensive Plan of Action," the senior parliamentarian said.

Boroujerdi said that the historical defeat of the terrorists in Aleppo on the one hand and the defeat inflicted on the ISIL terrorists in the Iraqi city of Mosul on the other has made the US to resort to new sanctions on Iran.

The prominent lawmaker reiterated that the new US sanctions on multiple Iranian entities are due to Washington’s anger from the defeat of the terrorists it has supported in the region.

Tags: Iran JCPOA Alaeddin Boroujerdi
Short Link rasanews.ir/201n8b
Share
0
Please type in your comments in English.
The comments that contain insults or libel to individuals, ethnicities, or contradictions with the laws of the country and religious teachings will not be disclosed