Iranians to Show Allegiance to Islamic Revolution on Friday

Rasa - Intelligence Minister Seyed Mahmoud Alavi underlined that the Iranian nation will give a crushing response to the US officials’ rhetoric and threatening remarks in their rally on Friday to mark the victory of the Islamic Revolution. 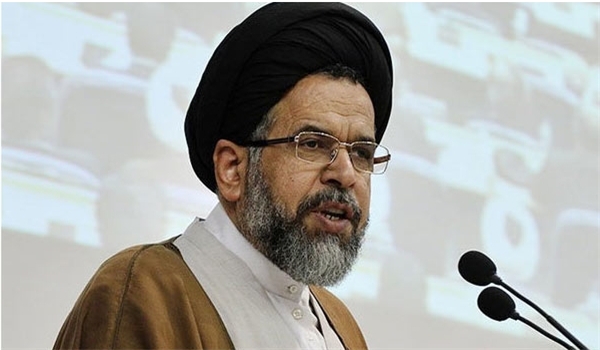 RNA - “Iranian people with their high turnout in the Islamic Revolution anniversary rallies will show that they are not afraid of threatening messages,” Alavi told reporters on Wednesday.

Millions of Iranians are expected to celebrate the anniversary of the victory of the Islamic Revolution Friday (February 10).

He pointed to the recent unwise remarks of US President Donald Trump, and said, “Iranians will attend the Revolution anniversary to show their commitment to the Revolution's ideals.”

Alavi said that the Islamic Republic of Iran is progressing forward based on the guidelines of Supreme Leader of the Islamic Revolution Ayatollah Seyed Ali Khamenei and the Revolution ideals.

In relevant remarks on Tuesday, Ayatollah Khamenei in sarcastic remarks to the US president thanked Donald Trump for showing the true face of his country to the world, and meantime told him that Iranians are too powerful to be intimidated by his threats.

"We are not thankful of that (Obama's) administration at all because it imposed heavy sanctions (against Tehran) with the aim of crippling the Iranian nation and the Islamic Republic and of course, it didn’t attain its goal as no other enemy will be able to cripple this great nation either," Ayatollah Khamenei said in Tehran, addressing the Army's Air Force and Air Defense commanders and personnel.

Ayatollah Khamenei, meantime, thanked Trump for showing Washington's real face to the world, and said he proved the correctness of Iran's warnings about the political, economic, social and moral corruption in the US ruling system.

In relevant remarks on Monday, Iranian First Vice-President Eshaq Jahangiri deplored the US officials' threats against Iran, stressing that Washington, itself, will be harmed by its hostile behavior towards Tehran.

"We welcome the language of talks and interaction and those who speak with the Iranian nation with the language of threat and impolitely will certainly lose," Jahangiri told reporters in the Southern city of Abadan.

Expressing the hope that the US would stop its hostilities against Iran, he said, "There is a very tall wall of distrust between Iran and the US because in many cases, the Americans have played a role against the Iranian nation and these issues cannot be wiped off the Iranian nation's mind easily and any soon."

His comments came after US President Donald Trump claimed on Sunday that Iran “lost respect” for the US in the wake of the 2015 nuclear deal signed between Tehran and the world powers, and that it now feels “emboldened” by the agreement.

In response, Secretary of Iran's Supreme National Security Council (SNSC) Ali Shamkhani underlined his country's continued progress and advancement in its defense and missile program, saying that the country is strongly opposed to foreign interference.

"We will not take permission from any country or international organization to develop our conventional defense power and we will confront any foreign interference in the defense affairs, including the Islamic Republic of Iran's missile power," Shamkhani said in a meeting with Armenian Defense Minister Vigen Sargsyan in Tehran on Wednesday.

Elsewhere, he blasted the western countries for their attempts to use sanctions to restrict the countries which are victims of terrorism, including Iran and Syria, and the West's support for terrorist groups.

"The Takfiri armed groups which are supported by certain regional states intellectually and financially beside the Zionist regime are two main threats to global security and unfortunately, the paper coalitions (those which have merely been formed on paper and take no practical measures) have not had any defensible performance in controlling these threats," Shamkhani said.

"The recent test was in line with our programs and we don’t allow any foreign party to interfere in our defense affairs," General Dehqan told reporters in Tehran in reaction to the recent UN Security Council meeting on Iran's missile test.

He underscored that the missile test "contradicts neither the nuclear deal (between Iran and the world powers signed in 2015) nor the Resolution 2231".

Tags: Intelligence Minister Seyed Mahmoud Alavi Islamic Revolution
Short Link rasanews.ir/201n8a
Share
0
Please type in your comments in English.
The comments that contain insults or libel to individuals, ethnicities, or contradictions with the laws of the country and religious teachings will not be disclosed