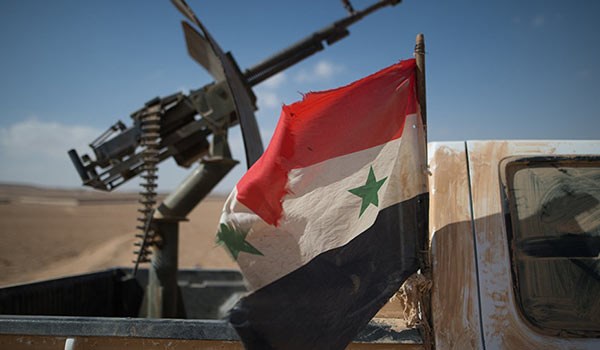 Syrian army troops and air force continued to hit the positons of the ISIL and Al-Nusra Front (recently renamed to Fatah al-Sham Front) in Eastern and Northern Homs, killing and wounding a number of terrorists.

The army units targeted the concentration centers of al-Nusra in the villages of Tir Ma'ala and Ezzeddeen in Northern Homs, Killing at least six terrorists and wounding 12 more.

In the meantime, Syrian warplanes carried out an airstrike on ISIL's positions in the village of al-Mshairfeh al-Shamaliyeh in Eastern Homs, inflicting major losses on the terrorists.

Sources privy to the terrorist groups disclosed earlier today that ISIL has sent a large convoy of military vehicles with a large number of forces and a large volume of equipment to Eastern Homs to stop the Syrian Army troops' advances in the region.

The sources said that ISIL has dispatched a long military column from Eastern Hama to the surroundings of the village of al-Beidheh al-Sharqi to the East of T4 airbase to join other terrorists to stop or slow down the army's advances in Eastern Homs.

Syrian Army soldiers carried out an ambush operation against a group of Al-Nusra Front (recently renamed to Fatah al-Sham Front) near a key village in Northern Lattakia, inflicting major casualties on the militants.

The army troops ambushed the Nusra group near the village of Kabani, killing the entire members of the group and seizing their arms and munitions.

The Nusra terrorists were planning an attack on government forces' positions in Kabani.

Opposition sources disclosed last month that al-Nusra Front was getting ready to carry out a large-scale attack against the Syrian army in the coastal province of Lattakia.

Websites affiliated to opposition groups disclosed that the provincial Security Council of Lattakia in a secret circular warned all the state security branches and military commands of the Syrian army that the city of Lattakia and its countryside should stay on alert to defend their territories against an imminent terrorist attacks.

The sources said that terrorists were getting ready to launch massive attacks in the mountainous regions of Lattakia to take control over the Kurds mountain and Turkmen mountain.

The source added that al-Nusra was preparing its forces since months ago for these massive offensives to capture the army strongholds with the help of Turkey's logistical back up.

Syrian Army troops engaged in heavy fighting with ISIL terrorists near the key town of Khanasser and could fend off their attack after inflicting a number of casualties on them.

The army men warded off ISIL's assault to prevail over government forces' positions to the South of Um Mayal town, killing or wounding tens of terrorists.

A military source said that the clashes between ISIL and the army men have not left any impact on army's control on Khanasser-Homs road, underlining that the key road from Hama to Aleppo is safe and open.

ISIL suffered a heavy death toll and its military hardware sustained major damage after the Syrian Army troops and Air Force intensified attacks on their gatherings and concentration centers near and inside the Eastern city of Deir Ezzur.

In the meantime, the army aircraft bombed heavily several positions of ISIL near Deir Ezzur Airbase in a night time air raid, while other warplanes pounded ISIL's positions in the neighborhoods of al-Roshdiyeh, al-Huwaiqa and al-Sina'ah, killing tens of militants and destroying their equipment.

All members of a terrorist group were killed or wounded in an explosive trap as they were on the way to carry out an operation against government forces in Northern Dara'a.

All members of the terrorist group were killed or wounded in the explosion.

Tags: Syria Aleppo
Short Link rasanews.ir/201n8U
Share
0
Please type in your comments in English.
The comments that contain insults or libel to individuals, ethnicities, or contradictions with the laws of the country and religious teachings will not be disclosed