Rasa - Israeli forces detained 18 Palestinians, including a woman and a minor, from several cities in the occupied West Bank, the Palestinian Prisoner’s Society (PPS) said in a statement on Tuesday. 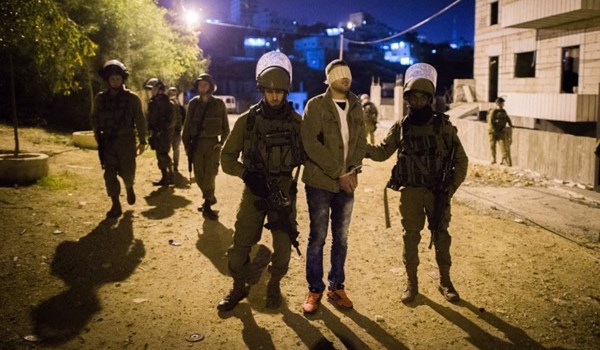 In addition to two Palestinians detained from Hebron, forces also detained another two from Tulkarem.

According to a joint report by the right groups the Commission of Detainees and Ex-Detainees Affairs, Palestinian Prisoner’s Society (PPS), Al Mezan center for Human Rights, Prisoners Support and Human Rights Association, Israeli has arrested 590 Palestinians, including 128 children, 14 women, one lawmaker and one journalist in the West Bank and Gaza Strip in January 2017.

The four organizations condemned Israel’s flagrant violation of the rules of international law in their treatment of the Palestinian detainees.

They called on the United Nations and the international community to “act to stop the grave violations and abuse against Palestinians, especially the continued practice of torture and the degrading treatment of children.”

Tags: Israel Palestine
Short Link rasanews.ir/201n8N
Share
0
Please type in your comments in English.
The comments that contain insults or libel to individuals, ethnicities, or contradictions with the laws of the country and religious teachings will not be disclosed