Rasa - In these difficult political and economic times, Western leaders and politicians refuse to address the plight of Syrian refugees, including the thousands that perished while attempting to cross the Mediterranean Sea in 2016. 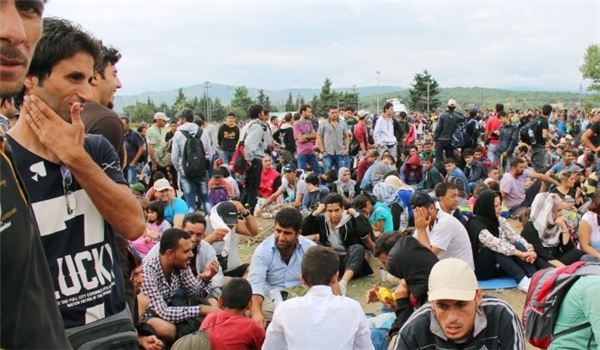 RNA - They refuse to admit that 2016 was the worst year in terms of the deplorable conditions for migrants and refugees in Europe and the United States. According to preliminary figures from the Office of the UN High Commissioner for Refugees and the International Organization for Migration, of the 363,348 people who crossed the sea in 2016, some 5,079 people - almost 1 in 72 - were lost (died or missing).

It’s terrifying to realize that the number could easily go up this year because America and its NATO partners refuse to change course as their wars are still creating even more refugees in the Middle East and North Africa. Worse still, speaking Monday at the Association of the United States Army's annual conference in Washington, President Donald Trump proposed to boost the size of the armed forces and expand further cooperation with NATO in eastern Europe, Syria, Iraq, Yemen, and Libya.

As Fars News Agency pointed out shortly after his election victory was announced, the stakes are especially high under the Trump administration: The recklessness of Trump’s policies and the threat he poses to the very foundation of global security, International Law, and International Humanitarian Law underscore the importance of a global resistance front, that is independent, thoughtful, and united.

The massive protests across the United States and Europe in the last two weeks against his Muslim ban and refugee restrictions are working; this week, a federal judge in Michigan halted Trump’s executive order to ban all travelers from seven Muslim countries, allowing those still holding a valid visa or a Green Card to enter the US. But that could change overnight. There are many others who will never have the chance to travel to the United States, simply because under the Trump administration they won’t be able to get travel visas or refugee status.

In the prevailing environment, it is more than ever crucial for the people of good conscience to take to the streets, call their politicians and lawmakers in Europe and the United States, and demand that they allow in more refugees, particularly from Syria. They should fight Trump’s Muslim ban, Islamophobia campaign, and war agenda. In the interim, the Office of the UN High Commissioner for Refugees and the International Organization for Migration should do everything they can to better protect refugees and migrants trying to reach Europe and the US. These people need a strong United Nations that is engaged beyond Western borders and politics to protect, assist and help find solutions for their urgent needs. This includes building capacity to save lives at sea or on land, strengthening the rule of law, and fighting against human trafficking networks.

It’s not that hard to also realize that all this human tragedy could go away if NATO and the United States stop their wars of attrition, occupations, and conflicts, particularly in Iraq, Syria, Yemen, Libya and Afghanistan. They can’t expect peace and security along their borders or in their capitals if they leave behind failed states and spur the spread of terrorist groups in Syria.

At this point, beyond banning Muslims from travelling to the United States or paying extortion money to Libya and Turkey to guard their overwhelmed borders, they have done absolutely nothing to ease the pains of refugees and migrants. Least do they realize that springtime is fast approaching and soon they will have to deal with even more desperate souls in the deadly waters of the Mediterranean.

True, last year was a disaster for refugees in the Mediterranean. But it could get worse this spring because the Trumpsters are increasing unnecessary tensions with Iran, Russia, Syria, China, and a host of other nations, including Europe and Mexico. They seek broader confrontation and they are upgrading their military capabilities accordingly. It’s a recipe for greater humanitarian disasters.

It doesn’t have to be that way. It is possible to force through peaceful means the racist politicians to move away from the so-called migration management policy based on the automatic detention of refugees and migrants in inhumane conditions towards ending the wars and the creation of proper reception services in Europe and the United States. As per International Humanitarian Law, Western governments must offer safe and dignified conditions, including for children and victims of war and terror, and respect key protection safeguards under the auspices of the United Nations.

They must move towards the adoption of a common approach to migration and the refugee crisis. They need to remember that dealing with just about one million refugees is not that much of a big deal. Iran alone is hosting over four million refugees from Afghanistan. The same could be said about Turkey, Lebanon and Jordan, where millions of Syrian refugees have been living since five years ago.

Concrete measures in support of regional peace and security, therefore, are needed to build capacity to end the ongoing conflicts in Syria, Iraq, Yemen and Libya, all while offering solutions to Syrian refugees and displaced populations. This should include ending military and diplomatic support for “moderate” terrorists.

Given the current context, it is not appropriate for the people of good conscience to sit on their hands, wait for the next flood of refugees and migrants this spring, and then take action. It is also wrong to consider Libya and Turkey safe third countries, or to establish extra-territorial processing of asylum seekers in North Africa.

Humane solutions can be found to end the suffering of millions of migrants and refugees if people of good conscience in the West demand their leaders and politicians do a foreign policy reversal, stop demonizing Iran, Syria and Russia, and end the colonial conflicts in the Muslim world.

Tags: NATO Migrant Muslim refugee Syria
Short Link rasanews.ir/201n8M
Share
0
Please type in your comments in English.
The comments that contain insults or libel to individuals, ethnicities, or contradictions with the laws of the country and religious teachings will not be disclosed