US Provokes Arab Neighbors into Acts against Iran

Rasa - Iranian First Vice-President Eshaq Jahangiri warned the neighboring Arab countries in the Persian Gulf not to be coaxed by the US into taking hostile measures against Tehran. 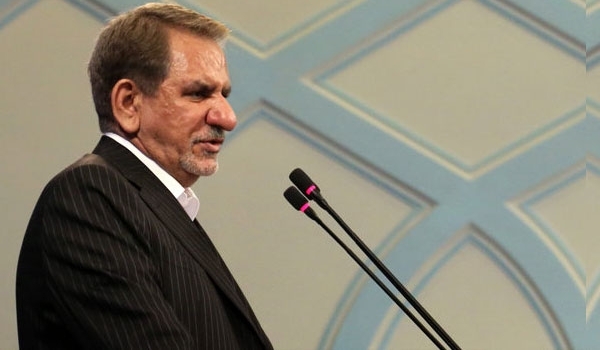 RNA - "The Persian Gulf littoral states sometimes show negligence and, instigated by the US, adopt certain measures against Iran," Jahangiri told reporters in the Southern city of Behbahan on Tuesday.

He underlined Iran's policy of friendship and peace with the neighboring states, and said, "We are interested in relations and sympathy with them."

His comments came after Iranian President Hassan Rouhani underlined that his country is looking for peaceful relations with its neighboring countries, including the Persian Gulf Cooperation Council (PGCC) member states.

He pointed to the differences between Iran and Saudi Arabia, and said, "Riyadh initiated the problem by invading a neighboring state."

The Iranian president said that it will be in the interest of Saudi Arabia to halt invasion of Yemen and avoid intervention in Bahrain and prevent terrorists from taking advantage of the country.

"We have no problems, but in fact their military invasion of Yemen and interference in Bahrain's affairs are the root causes of our problems," President Rouhani said.

Tags: US Iran Arab
Short Link rasanews.ir/201n8H
Share
0
Please type in your comments in English.
The comments that contain insults or libel to individuals, ethnicities, or contradictions with the laws of the country and religious teachings will not be disclosed