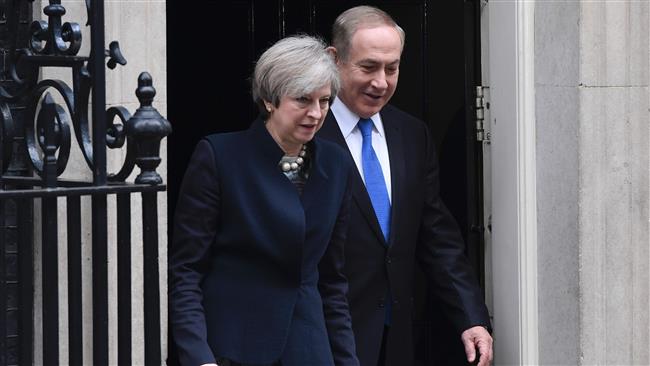 RNA - On his first UK visit since May’s rise to power, Netanyahu said in a joint press conference on Monday that “responsible nations” should follow US President Donald Trump and impose more sanctions on Iran.

“That's why I welcome President Trump's insistence on new sanctions against Iran,” he added, referring to Washington’s fresh sanctions against a number of Iranian individuals and entities following its latest missile test.

The fearmongering, however, failed to impress May, who views the nuclear deal between Iran and six world powers, including America and Britain, “vital” for the Middle East’s security.

A spokeswoman for the British premier said Monday that the British PM “made clear” to his visiting counterpart that “we support the deal on nuclear that was agreed.”

"What needs to happen now is that it needs to be properly enforced and policed,” the spokeswoman added.

Under the Joint Comprehensive Plan of Action, or JCPOA, which entered into force last year, Iran limited parts of its peaceful nuclear program in exchange for the complete removal of all sanctions against the country.

May relayed the same message to Trump during her visit to Washington last week.

Trump, however, pushed ahead with his own agenda and introduced a new round of sanctions against Iran over the country’s successful test-launch of a ballistic missile.

Washington argued that the test was in violation of Security Council Resolution 2331, which endorses the JCPOA.

Iran has made it clear that its test-launches do not pose a threat to any country in the region and are solely conducted to bolster its defense capabilities and protect its regional allies.

Tehran has also warned the new US administration that it would give an “effective and immediate” response to any violation of the nuclear deal.

Tags: JCPOA Netanyahu
Short Link rasanews.ir/201n86
Share
0
Please type in your comments in English.
The comments that contain insults or libel to individuals, ethnicities, or contradictions with the laws of the country and religious teachings will not be disclosed