Rasa - Some 3,000 Muslim women and their supporters marched in Vienna protesting government plans to impose a ban on wearing full-face veils in public places. 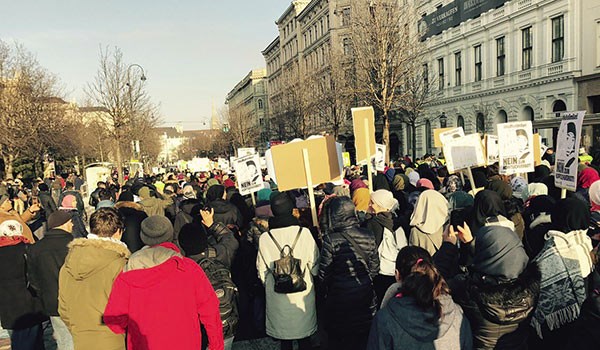 RNA - The protest in front of Austria’s Federal Ministry for Europe, Integration and Foreign Affairs was staged by the Network Muslim Civil Society (NMZ) organization in cooperation with some other Muslim associations, RT reported.

The protesters marched under the slogan “MuslimBanAustria: My body - My right of self-determination!” claiming that the full-face veil is an instrument of women's “self-empowerment.”

Before the march started, one of the organizers ordered the male supporters to go to the end of the procession, since it was a “women's event.”

“Since we’re marching forward as a women’s block: we first!” she said.

The protesters carried various placards, many of which were in English presumably to appeal to an international audience. Some of them read “Against racism, sexism,” “Islamophobia is not freedom” and “Hijab is a personal experience.”

The crowd chanted “We are here and we are loud, because you steal our freedom!” and “Hey, minister! Hands off my sister!”

Some of the non-Muslim protesters said that they attended the event out of solidarity to resist the “rise of Donald Trump” which, according to them, constitutes the triumph of “anti-Muslim racism” and endangers all the gains of the feminist movement.

Austria’s ruling coalition announced plans to ban all Muslim face veils in public places, which came as a part of the new “integration law” on Monday. The measures are expected to be implemented before the next parliamentary elections in 2018.

“We believe in an open society that is also based on open communication. Full-body veils in public spaces stand against that and will therefore be prohibited,” text of the plan read.

Apart from the ban on Muslim face veils, the “integration law” includes mandatory attendance of German language lessons and “value courses” for all refugees and migrants arriving in Austria. Those who refuse to do so would see their social benefits cut.

The controversial legislation has sparked heated debates already, as opponents see it as a “sexist” and “anti-Muslim” measure, which violates women’s and general human’s rights.

Tags: Muslim Burqa Austria protest
Short Link rasanews.ir/201n7w
Share
0
Please type in your comments in English.
The comments that contain insults or libel to individuals, ethnicities, or contradictions with the laws of the country and religious teachings will not be disclosed