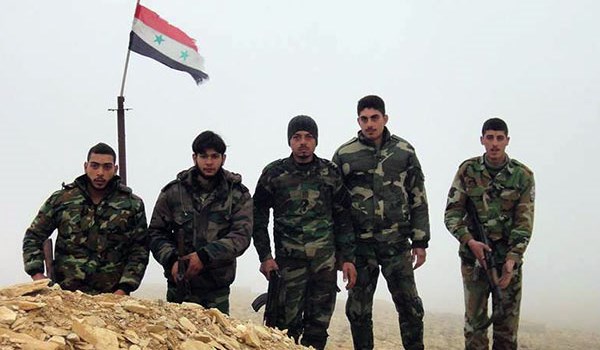 RNA - The Syrian army killed and wounded scores of terrorists as they engaged in heavy clashes with the militants South of Kuweires military airport in Aleppo province.

Syrian Army troops engaged in an intense battle with ISIL in a region to the South of Kuweires military airport, driving them out of a small but strategic town.

The army soldiers struck ISIL's positions to the Northeast of Sabkhat al-Jaboul region and managed to take back the town of Um Arkileh.

Army reports said ISIL has suffered dozens of casualties in the attack.

The army's engineering units started defusing bombs, explosive traps and landmines planted by the ISIL in the town immediately after capturing the town.

The Syrian Observatory for Human Rights (SOHR) said on Wednesday that the Syrian Air Force struck badly ISIL's defense lines in regions to the Southeast of Kuweires Airbase, killing at least 30 terrorists and destroying their equipment.

SOHR disclosed that over 30 ISIL terrorists were killed in the warplanes' air raid in a region between South of Kuweires and West of the town of Deir Hafer.

In the meantime, the army troops continued attacks on ISIL's last bases in Eastern Aleppo and could manage to advance against terrorists in regions near the towns of al-Bab and Deir Hafer, killing and wounding a number of terrorists.

The army soldiers also engaged in heavy fighting with terrorists near the village of al-Karin to liberate the village, cutting off terrorists' supply road connecting al-Karin to Deir Hafer.

The army troops also stormed ISIL's positions in the village of Showeilekh along the road connecting the Air Force Academy to a region near Deir Hafer.

The army men also hit ISIL's positons in al-Bab region and decreased their distance to the terrorist-held town.

Konstantin Troyotsov, an analyst in the Eastern Studies Center affiliated to Russia's Sciences Academy, said that the Syrian army from South and Southwest, Turkish army from North and Northwest and Kurdish groups from East laid siege on ISIL-held al-Bab.

He further underlined that the Syrian Army had a real chance and opportunity to liberate al-Bab.

The Kurdish-led Syrian Democratic Forces (SDF) continued the third phase of their Euphrates Rage Operation and advanced against ISIL, taking control over two villages and a large farm.

The Kurdish fighters advanced against ISIL from two different directions.

The SDF stared attacking ISIL's positions from al-Makan region and pushed the ISIL members back from the village of Abu Natali and Hadi.

In the meantime, the Kurdish fighters carried out another attack on ISIL's defense lines from the village of Khaniz and seized control over Doqan farm.

The army forces stormed ISIL's defense lines in Deir Ezzur's cemetery from Wadi al-Neshan to the Northwest of Deir Ezzur airbase, while other units of the army struck terrorists' positions in the cemetery from 137th brigade, and engaged in heavy clashes with the militants.

In the meantime, the army's artillery and missile units shelled ISIL's movements in the cemetery region, Jonayd Division and al-Tamin Brigade South of Deir Ezzur city, killing or wounding a large number of terrorists and destroying their vehicles.

Syrian Army troops and warplanes targeted the positions and movements of ISIL and Al-Nusra Front (recently renamed to Fatah al-Sham Front) in different parts of Hama province, inflicting tens of casualties on the terrorists.

The army's artillery units opened heavy fire at al-Nusra's concentration centers in Aqrab in the countryside of the town of Masyaf, destroying the positions and killing all the militants inside them.

The army men also targeted movements of Jeish al-Izzah terrorists in the village of Atshan in Northern Hama, killing a number of militants and destroying three motorcycle.

Terrorists' centers and movements in al-Satahiyat region to the West of Salamiyah came under heavy attack of the army soldiers as well.

Terrorists in al-Satahiyat suffered a heavy death toll and the remaining pockets of them fled the battlefield.

The army aircraft meantime bombed ISIL's positions in Aqayrabat region and to the East of al-Bal'as Mountain, destroying a position and a vehicle carrying munitions and killing the terrorists on board.

Syrian Army troops and Air Force targeted heavily the positions and gatherings of Al-Nusra Front (recently renamed to Fatah al-Sham Front) in Northwestern Homs, killing or wounding a number of militants and destroying their command centers.

A large number of terrorists were killed and several vehicles were destroyed in the armed forces' attacks.

Tags: Hama Deir Ezzur Syria ISIL Homs Aleppo Raqqa
Short Link rasanews.ir/201n7t
Share
0
Please type in your comments in English.
The comments that contain insults or libel to individuals, ethnicities, or contradictions with the laws of the country and religious teachings will not be disclosed