Rasa - Iranian Parliament Speaker Ali Larijani says terrorism has turned into a critical issue in the Middle East, stressing that all countries are required to strengthen their determination to fight the vicious phenomenon. 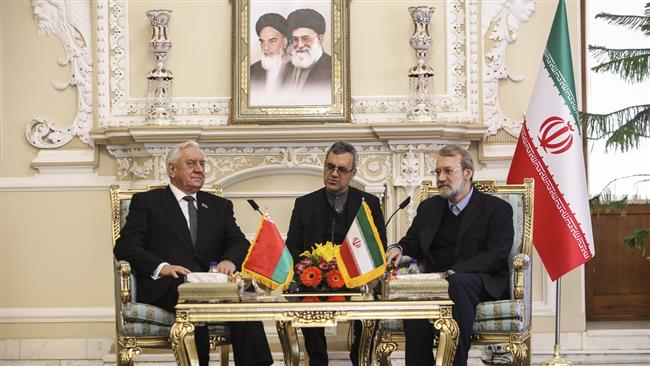 RNA - “If this issue [terrorism] is not confronted seriously, it will definitely spill over into other regions as well,” Larijani in a meeting with Belarusian Council of the Republic Speaker Mikhail Myasnikovich in Tehran on Monday.

Larijani stressed the importance of bolstering security cooperation between Tehran and Minsk especially under current circumstances and said the two sides must further boost their relations to help solve regional crises, including terrorism.

Larijani commended close economic and parliamentary cooperation between Iran and Belarus and added that the two countries had common stances on many international issues.

The Iranian parliament speaker also expressed the Islamic Republic's readiness to sell oil to Belarus and increase trade ties between the two countries.

The top Belarusian parliamentarian said his country regards Iran as a key partner and called for efforts to expand bilateral political and parliamentary relations.

He added that Tehran and Minsk shared views on important international issues, highlighting the significance of security cooperation, particularly in the fight against terrorism, between the two states.

The top Iranian and Belarusian parliamentarians signed a memorandum of understanding to bolster parliamentary cooperation in a variety of sectors.

According to the agreement, the two countries would improve parliamentary cooperation in the fields of economy, commerce, investment, science, technology, education, tourism and culture.

The two sides also agreed to strengthen close cooperation and adopt a common stance in regional and international bodies such as the Inter-Parliamentary Union.

Myasnikovich arrived in Tehran Monday morning at the official invitation of the Iranian parliament speaker to hold talks with senior authorities.

Tags: Iran Larijani Terrorism
Short Link rasanews.ir/201n7m
Share
0
Please type in your comments in English.
The comments that contain insults or libel to individuals, ethnicities, or contradictions with the laws of the country and religious teachings will not be disclosed