UK mosques open doors to people of other faiths

Rasa - More than 150 mosques and Islamic centers around the UK have opened their doors to people of other faiths to promote a better understanding of Islam and Muslims. 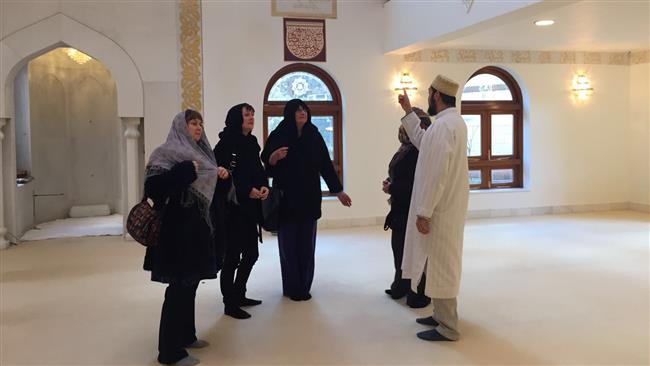 RNA - The annual ‘Visit My Mosque Day’ observed on Sunday attracted thousands of visitors, a prominent guest being the leader of the main opposition Labour Party, Jeremy Corbyn.

Corbyn, who was being accompanied by his party’s Shadow Foreign Secretary Emily Thornberry, underlined the importance of kindness in communities.

“Over the last few weeks, there has been some awful language used in many parts of the world. Awful language degenerates into awful actions; those awful actions end up in the deaths of wholly innocent people, as happened in Quebec,” he said, referring to an attack on a mosque in Canada which left six people dead.

The Labour leader said “he will send his gentle message to a man across Atlantic who seems to be in need of more understanding,” in an apparent jab at Trump’s policies.

Also in what seemed to be a reference to Trump's controversial plan to build a wall along the Mexico border, Corbin said, “Drinking tea together is far more effective than pouring concrete to build walls to keep each other apart.”

The ‘Visit My Mosque Day’ is an annual event in which British Muslims showcase social action projects including tackling food distribution, homelessness and refugees. Also, the basic tenets of Islam, prayer rituals and the influence of faith on everyday life are explained.

Mosques had expressed hope that non-Muslims would take the opportunity to show solidarity in the face of rising Islamophobia in the country and elsewhere.

“Visit My Mosque Day aims to provide a platform for Muslims to reach out to fellow Britons and explain their faith and community beyond the negative media headlines,” the Muslim Council of Britain, the event’s organizers, said on its official website.

There are at least 2.7 million Muslims in Britain, or less than five percent of the country's population of 65 million. Around half of British Muslims are born in the UK.

Tags: Muslim UK Islamophobia
Short Link rasanews.ir/201n7j
Share
0
Please type in your comments in English.
The comments that contain insults or libel to individuals, ethnicities, or contradictions with the laws of the country and religious teachings will not be disclosed