Rasa - An Israeli court has sentenced a 16-year-old Palestinian girl to six years in prison on charges of possessing a knife and planning an alleged stabbing attack in the occupied East Jerusalem al-Quds in December 2015. 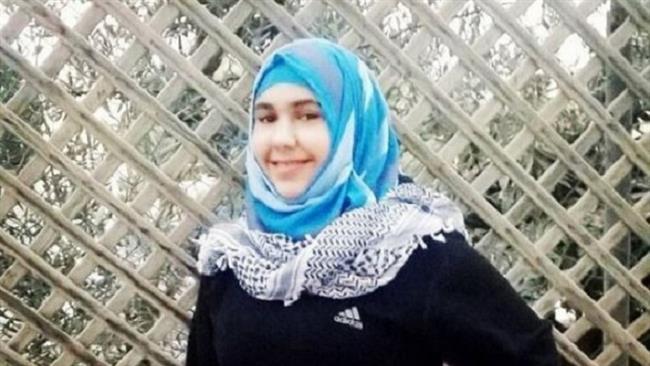 RNA - The Jerusalem al-Quds Magistrate's Court passed the verdict against Manar Majdi Shweiki, from the East Jerusalem al-Quds neighborhood of Silwan, on Sunday. The teenage girl has already spent more than a year in detention.

Shweiki was detained in the Wadi Hilweh area of Silwan on December 6, 2015, after Israeli police claimed that she was carrying a knife in her school bag at the time, accusing her of planning to carry out an attack against Israelis.

Two days later, however, Israeli authorities released her, giving no explanation why they had stopped her and searched her belongings.

On December 22, they re-arrested Shweiki on the streets of the occupied Old City of East Jerusalem al-Quds, in the al-Sharaf neighborhood. It remained, however, unclear what prompted the Israeli regime to detain her for the second time. Since her detention, the teenage girl has been moved between Israel's Ramla and HaSharon prisons.

On Sunday, Hayat Shweiki, Manar’s mother, told the Palestinian Ma'an News Agency that the court had postponed the ruling twice since the beginning of this year.

The Sunday ruling against Shweiki is the latest in an Israeli crackdown on young Palestinians of al-Quds area, many of whom women, who have been accused of carrying out alleged stabbing attacks against Israelis.

Israeli authorities have so far handed down lengthy prison terms to many Palestinians, even as young as 14 years old, in both East Jerusalem al-Quds and the occupied West Bank territories.

On November 7, 2016 an Israeli court sentenced a Palestinian teenager to 12 years in prison over an alleged stabbing attack last October, while giving 11 years' imprisonment to a Palestinian woman over alleged car ramming.

The Jerusalem al-Quds District Court sentenced 14-year-old Ahmad Saleh Manasra to 12 years in jail on alleged charges of attempting to murder a 20-year-old man and a 12-year-old boy in the illegal Israeli settlement of Pisgat Zeev in East Jerusalem al-Quds on October 12, 2015.

The occupied Palestinian territories have witnessed tensions ever since Israel imposed restrictions on the entry of Palestinian worshipers into the al-Aqsa Mosque compound in East Jerusalem al-Quds in August 2015. More than 280 Palestinians have lost their lives at the hands of Israeli forces in the tensions since the beginning of October that year.

Israeli forces have been under fire by international rights groups for using excessive force and extrajudicial killings of Palestinian people.

Tags: Israel Palestine
Short Link rasanews.ir/201n7U
Share
0
Please type in your comments in English.
The comments that contain insults or libel to individuals, ethnicities, or contradictions with the laws of the country and religious teachings will not be disclosed