Rasa - A number of US Republican states are introducing new laws that would ban people from protesting against President Donald Trump. 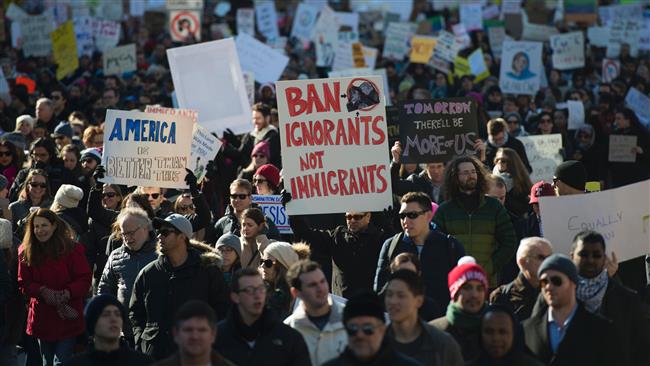 RNA - Some state legislatures had registered the bills before Trump’s inauguration in response to mass protests organized by civil rights groups, including Black Lives Matter.

However, after Trump took office on January 20, the matter has come under fresh scrutiny.

At least 10 new bills seeking to curb the right to protest have been filed by state legislatures.

Minnesota and Iowa introduced laws against protesters who disrupt traffic, but civil liberties organizations expressed concern that the laws violate the First Amendment, which guarantees freedom of speech, as well as the right to peaceful assembly.

In North Dakota, where numerous protests have been held over the construction of the controversial North Dakota Access pipeline, a bill was introduced which would allow motorists to run over a protester, so long as the driver did not “intend” to kill them.

“If you stay off the roadway, this would never be an issue,” State Representative Keith Kempenich told local media. “Those motorists are going about the lawful, legal exercise of their right to drive down the road.”

In Indiana, lawmakers proposed a bill in January that would enable officials to immediately dispatch “all available law enforcement” to clear a traffic blockade caused by at least 10 people “by any means necessary.”

“We need to keep our streets and interstates open to commerce, traffic, motorists and emergency personnel,” said Senator Jim Tomes, who introduced the bill.

In North Carolina, a state senator will put forward a bill next week which would make it a criminal offense to “threaten, intimidate, or retaliate against a present or former North Carolina official in the course of, or on account of, the performance of his or her duties.”

Trump’s controversial remarks during his presidential campaign and extreme measures after he took office have led to mass protests both in the US and abroad.

Tags: Muslim Trump
Short Link rasanews.ir/201n7P
Share
0
Please type in your comments in English.
The comments that contain insults or libel to individuals, ethnicities, or contradictions with the laws of the country and religious teachings will not be disclosed