Rasa - A Bahraini court has handed down 15-year prison sentences to three citizens each over an alleged attack on a police headquarters during an anti-regime protest rally in 2013. 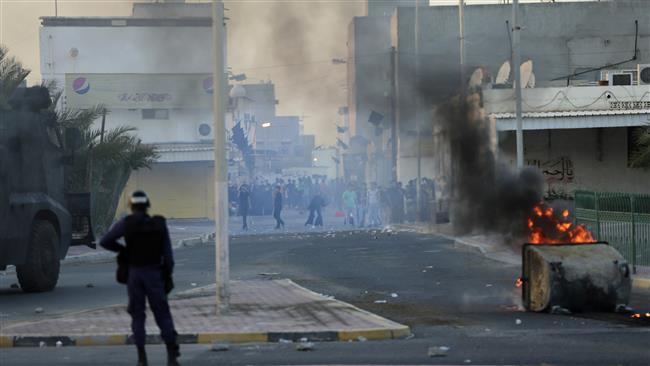 According to the report, those sentenced were among 40 Bahrainis accused of having thrown Molotov cocktails at the police headquarters in Khamis area on October 10, 2013.

The incident damaged the police center and destroyed a patrol car.

According to Bahrain’s al-Wasat newspaper, seven of the defendants are in the kingdom, while the other three are abroad.

The developments come as the Manama regime has stepped up its crackdown on protests in the run-up to the sixth anniversary of a popular uprising in the kingdom against the ruling Al Khalifah family.

On Saturday, locals held a demonstration in the village of Abu Saiba to express their solidarity with Bahraini prisoners.

Moreover, people staged a sit-in outside the home of top Shia cleric Sheikh Isa Qassim in the village of Diraz, which has been under a siege by regime forces over the past six months.

The protesters held placards with slogans in support of the spiritual leader of Bahrain’s dissolved opposition bloc, the al-Wefaq National Islamic Society.

Qassim was stripped of his nationality in June 2016 over accusations of serving foreign interests and promoting sectarianism and violence. The clergyman has denied the allegations.

Since February 2011, Bahrain has been the scene of almost daily demonstrations against the Al Khalifah rule.

Tags: Al Khalifah bahrain
Short Link rasanews.ir/201n7M
Share
0
Please type in your comments in English.
The comments that contain insults or libel to individuals, ethnicities, or contradictions with the laws of the country and religious teachings will not be disclosed