Rasa - Thousands of people have taken to the streets of Tel Aviv in protest of Israel’s demolishing Palestinian homes in the village of Umm al-Hayran and other regions. 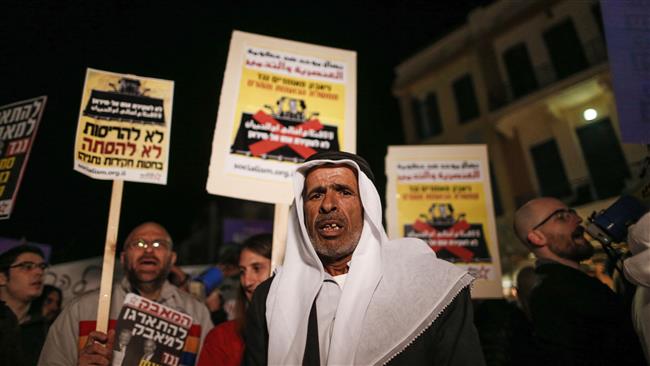 They also called for the resignation of Israel's public security minister Gilad Erdan for lying in relation to the death of a teacher in Umm al-Hayran.

Yaqoub Mousa Abu al-Qian was killed in January during protests against Israel’s destruction of homes in the village.

Israelis claimed Qian rammed Israeli officers with his vehicle and left an officer dead, but numerous witness accounts and investigations by Israeli media and NGOs suggest that police opened fire on the man while he was driving normally, causing him to lose control of his vehicle and hit several people. An Israeli officer was killed and several others were wounded in the incident.

Qian’s widow was also present at the rally, where she decried racist Israeli policies which led to the death of her husband.

“Since the incident, no one has spoken to us and explained what happened… want to be like everyone else. I want the same respect they gave to residents of Amona. We demand to know the truth behind the incident,” she said.

Last week, Israel announced plans to establish a new illegal settlement in the occupied West Bank to accommodate the settlers evicted from the illegal Amona outpost.

Israeli demolitions of Palestinian homes and structures have raised alarm among diplomats and human rights groups over what they regard as the Tel Aviv regime’s continued violation of international law.

More than half a million Israelis live in over 230 settlements built since the 1967 Israeli occupation of the West Bank including East Jerusalem al-Quds. The international community regards the settlements as illegal as they are built on private Palestinian lands. Israel has defied international calls for a halt to its settlement activities.

Tags: Israel Palestine
Short Link rasanews.ir/201n7K
Share
0
Please type in your comments in English.
The comments that contain insults or libel to individuals, ethnicities, or contradictions with the laws of the country and religious teachings will not be disclosed