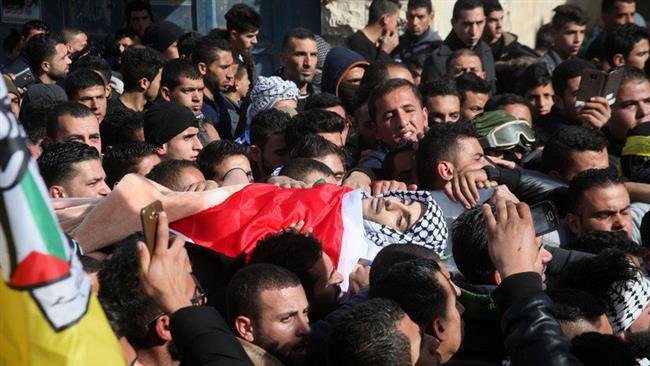 RNA - Defense for Children International Palestine (DCIP) said on Saturday that 17-year-old Qusay al-Amour was killed during violent clashes in the town of Tuqu’, located 12 kilometers southeast of Bethlehem, on January 16, stressing that he was fatally shot rather than being indiscriminately struck.

The DCIP further added that Amour sustained two gunshot wounds in the chest. One of the bullets fired at him purportedly struck the upper right side of the chest, while another hit the center of his chest, causing severe internal bleeding and his death at last.

Hisham Abu Shakra, a witness and photographer for Turkey’s official Anadolu news agency, said the 17-year-old was far away from confrontations between Palestinian youths and Israeli forces near the western entrance of Tuqu’ as an onlooker.

Shakhra added that he heard shots being fired four times in a row before Amour fell to the ground. A number of troopers then moved speedily toward the Palestinian boy, and viciously battered him after which they dragged the ill-fated teenager towards their jeeps.

The DCIP also dismissed earlier allegations that Israeli troopers use the Ruger 10/22 semi-automatic rimfire rifle in the face of protesting Palestinian crowds, saying the severity of gunshot wounds that Palestinians have suffered shows they have been struck with much stronger rifles.

Meanwhile, tens of Palestinians have been injured after fierce skirmishes broke out between porters and Israeli forces in the Beit Amr region of the West Bank.

Israeli military forces then sealed the entrances into and exits out of Beit Amr, checking all vehicles arriving at and departing from the area.

Nearly 280 Palestinians have lost their lives at the hands of Israeli forces since the beginning of October that year.

Tags: Israel Palestine
Short Link rasanews.ir/201n7J
Share
0
Please type in your comments in English.
The comments that contain insults or libel to individuals, ethnicities, or contradictions with the laws of the country and religious teachings will not be disclosed