US setbacks in Mideast behind Iran new sanctions

Rasa - A senior Iranian lawmaker says the defeats of US-backed terrorists in the Middle East prompted Washington to impose new sanctions against the Islamic Republic, adding that the new US sanctions amount to a violation of Tehran's nuclear agreement. 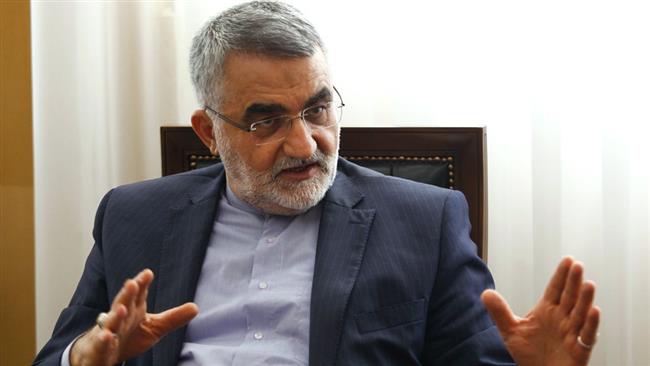 RNA - “The recent sanctions against Iranian individuals and entities are because of Washington’s rage at the defeats of terrorists it supports in the region,” Chairman of the Iranian Parliament's Committee on National Security and Foreign Policy Alaeddin Boroujerdi said on Saturday.

He emphasized that the imposition of new sanctions against Iran is a breach of a landmark nuclear agreement, known as the Joint Comprehensive Plan of Action (JCPOA), which was signed between Iran and the P5+1 group of countries, including the United States, in July 2015.

The US Treasury Department said on Friday that Washington had imposed sanctions on 13 individuals and 12 entities as part of bids to ratchet up pressure on Iran over Tehran’s missile program and spiritual support for Yemen's Houthi fighters.

The move against Iran is the first by the US government since President Donald Trump took office on January 20.

Boroujerdi further said the new US sanctions came after terrorists’ defeats in the strategic Syrian city of Aleppo and the Iraqi city of Mosul.

He added that the US and its allies had spent billions of dollars to support terrorists but all their efforts have failed due to Iran’s effective advisory presence in Syria and Iraq, saying Washington is now very angry with the ongoing circumstances.

The Syrian military announced on December 22, 2016 that it had attained full control of Aleppo, having completely cleansed its eastern side of militants for the first time since 2012.

The victory came about despite military support for the militants by the United States, Turkey, and some Arab countries in the Persian Gulf region.

The Iraqi army announced in a statement on January 22 that all districts of eastern Mosul had been cleared of Daesh terrorists.

The Iranian legislator said the fresh sanctions were a reaction to the terrorists’ setbacks in the region.

“However, the US must know that such sanctions will have no impact on the firm determination of the Islamic Republic in the fight against terrorism and Iran will strongly counter the agents of the US and Britain in the region,” Boroujerdi pointed out.

“We will never allow them to misuse [the situation] in the region,” he said.

He warned that the recent measures by the US government would lead to Washington’s isolation in the near future.

In a statement on Friday, the Iranian Foreign Ministry slammed as illegal the US anti-Iran sanctions and said the Islamic Republic would deliver a "proportionate and reciprocal" response to the move.

“The Islamic Republic of Iran, with the backing of the wise participation and support of the great Iranian nation, will respond proportionately and reciprocally to any move that targets the interests of the Iranian people,” the statement said.

Tags: US Iran sanction
Short Link rasanews.ir/201n7B
Share
0
Please type in your comments in English.
The comments that contain insults or libel to individuals, ethnicities, or contradictions with the laws of the country and religious teachings will not be disclosed