Rasa - Israeli forces have reportedly finished a 10-kilometer section of the Israeli separation wall in the south of the occupied West Bank district of Hebron, Hebrew-language media reported on Saturday. 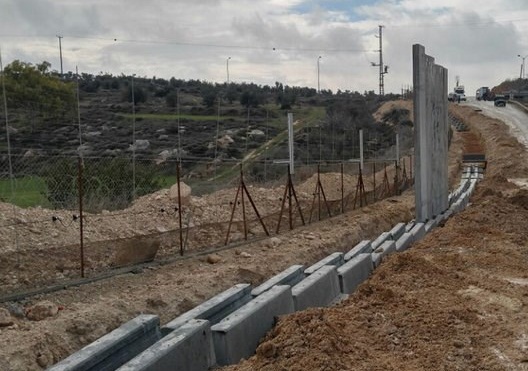 Israeli forces have reportedly finished a 10-kilometer section of the Israeli separation wall in the south of the occupied West Bank district of Hebron, Hebrew-language media reported on Saturday.

Hebrew-language site Walla reported that the order to complete the wall in the area came as a punitive response to a deadly shooting attack in Tel Aviv carried out in June last year by Palestinians from the village of Yatta in Hebron.

According to Walla, the plan was set by the Israeli Defense Ministry and states that the separation wall would start from the Tarqumiya checkpoint in western Hebron to the Meter checkpoint in the south. The wall is 42-kilometers long and is erected on the side of bypass road 35, constructed for the use of settlers illegally residing in Palestinian territory to connect them with Israel.

The wall is scheduled to be completed by the end of the year, according to Walla.

Israel began building the separation wall with concrete slabs, fences, and barbed-wire inside the occupied West Bank in 2002 at the height of the Second Intifada, claiming it was crucial for security.

The ICJ issued an advisory opinion in 2004 stating that the wall was illegal under international law and its construction must stop immediately, adding that reparations should be paid to Palestinians whose properties were damaged as a result of the construction.

Twelve years later, the construction of the wall has continued unabated as more than 62 percent of the construction has been completed, encroaching deep into the Palestinian territory, leaving Palestinian neighborhoods stranded on both sides of the barrier, and isolating communities from their agricultural lands.

When complete, the majority of the wall’s construction, 85 percent, will have been built inside the occupied Palestinian territory over the Green Line, consuming vast tracts of Palestinian land along its way and consuming land in Area C -- the two-thirds of the the West Bank that are under full Israeli military and civil control -- where illegal settlements have been built or are planned to be constructed in the future.

Tags: Israel Palestine
Short Link rasanews.ir/201n79
Share
0
Please type in your comments in English.
The comments that contain insults or libel to individuals, ethnicities, or contradictions with the laws of the country and religious teachings will not be disclosed