Rasa - Israeli forces violently suppressed a weekly march in the village of Kafr Qaddum in the occupied West Bank district of Qalqiliya, while a march was also held in the village of Bilin in Ramallah in solidarity with Palestinians held in Israeli prisons. 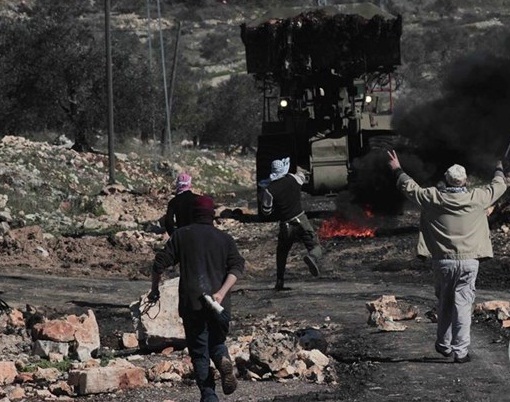 RNA - In the village of Kafr Qaddum, tens of Palestinian and international activists suffered from tear gas inhalation after Israeli forces suppressed their weekly march launched in solidarity with Palestinian prisoners who have been the target of Israeli raids in the prisons of Nafha and Ktziot.

Popular Resistance coordinator, Murad Shteiwi said that tens of Israeli soldiers, escorted by Israeli military vehicles and a bulldozer, raided the village and opened live ammunition, rubber-coated bullets, sound bombs, and tear gas canisters into the crowd of protesters, causing many to suffer tear gas inhalation. All the protesters were treated at the scene.

Shteiwi added that hundreds of Palestinian, Israeli, and international peace activists participated in the march in solidarity with Palestinian prisoners and to protect Israel’s “racist policies” against Palestinians in the occupied territory.

Witnesses told Palestinian website, Ma’an, that Israeli forces had also raided the front yard of a house belonging to Abed al-Latif, and turned it into a military post where Israeli snipers stationed themselves and opened live fire at protesters.

Residents of Kafr Qaddum began staging weekly protests in 2011 against land confiscations, as well as the closure of the village's southern road by Israeli forces. The road, which has been closed for 14 years, is the main route to the nearby city of Nablus, the nearest economic center.

The Israeli army blocked off the road after expanding the illegal Israeli settlement of Kedumim in 2003, forcing village residents to take a bypass road in order to travel to Nablus, which has extended the travel time to Nablus from 15 minutes to 40 minutes.

Hundreds of Palestinians have been detained during the demonstrations since their start in 2011, and at least 84 protesters have been injured by live fire, including 12 children.

Some 120 others have been detained at demonstrations and were subsequently held in Israeli custody for periods ranging between four and 24 months, Shteiwi said at the time, adding that they have paid fines approximately $6,488.

Over the course of five years, an elderly protester was killed after suffering from excessive tear gas inhalation, one youth lost his eyesight, and another his ability to speak, he added.

In December, Israeli forces became the focus of international condemnation when Israeli soldiers wearing matching plain clothes and black ski masks detained a seven-year-old Palestinian during a weekly protest in the village.

A video of the incident was taken by a volunteer of B’Tselem and quickly went viral. Rights groups and activists pointed out that the video seems to show the soldiers using the child as a human shield during clashes.

B’Tselem strongly condemned the incident at the time, saying that “it does not take a lawyer to know that the detention of a seven-year-old child by soldiers, keeping him by their side as they shoot at his friends, is deplorable and utterly unacceptable."

In Bilin, their weekly march was launched from the village center after Friday prayers with the participation of international solidarity activists.

Protesters marched in the streets holding Palestinian flags and pictures of Palestinian prisoners. They demanded the release of the some 7,000 Palestinians held in Israeli prisons.

Coordinator of the popular resistance committee, Abdullah Abu Rahma condemned Israeli raids on Palestinians held in Israeli prisons, saying that it was an “additional punishment” against Palestinian prisoners.

Abu Rahma urged other communities to expand their popular resistance activities in solidarity with Palestinian prisoners, and to take Bilin as a model movement for others to follow in order to resist Israeli confiscations of lands and demolition of Palestinian homes. He noted that Bilin has successfully defended Palestinian lands from "the grip of Israeli occupation," while protesters have also demolished parts of Israels separation barrier.

He also pointed out that the weekly marches in Bilin have now entered their 13th consecutive year.

Bilin is one of the most active Palestinian villages in peaceful organized opposition against Israeli policies, as residents have protested every Friday for more than a decade, and have often been met with tear gas, rubber-coated steel bullets, and stun grenades from Israeli forces.

Tags: Israel Palestine
Short Link rasanews.ir/201n70
Share
0
Please type in your comments in English.
The comments that contain insults or libel to individuals, ethnicities, or contradictions with the laws of the country and religious teachings will not be disclosed