Rasa - Regime forces in Bahrain have clashed with people protesting in solidarity with prisoners and martyrs in the run-up to the sixth anniversary of a popular uprising in the Arab country. 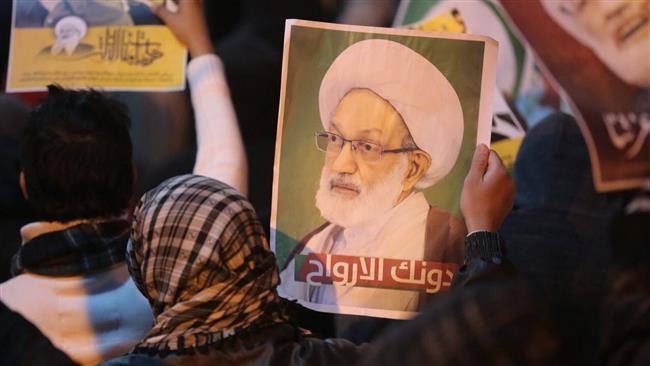 Similar clashes were further reported in the Bahraini town of Bilad al-Qadim.

Elsewhere, in the village Diraz, people held a sit-in outside the home of top Shia cleric Sheikh Isa Qassim.

Qassim, the spiritual leader of Bahrain’s dissolved opposition bloc, the al-Wefaq National Islamic Society, was stripped of his nationality last June over accusations that he used his position to serve foreign interests and promote sectarianism and violence. The clergyman has denied the allegations.

They also called on Johnson to press the Manama regime to release the campaigner.

Rajab, who was arrested last June, is accused of “spreading false news and rumors and inciting propaganda during wartime.” He denies the allegations.

Home to the US Navy’s Fifth Fleet, Bahrain has been rocked by a wave of anti-regime demonstrations since February 2011, when the popular uprising began. Scores of people have been killed and hundreds of others wounded or detained amid Manama’s crackdown on dissent and widespread discrimination against the country’s Shia majority.

Tags: Sheikh Isa Qassim Shia bahrain
Short Link rasanews.ir/201n6x
Share
0
Please type in your comments in English.
The comments that contain insults or libel to individuals, ethnicities, or contradictions with the laws of the country and religious teachings will not be disclosed