Rasa - A new video filmed by Al Jazeera has contradicted claims by Israeli officials concerning the killing of Bedouin teacher and who was shot dead by Israeli police last month during violent demolition raids in the village of Umm al-Hiran in the Negev. 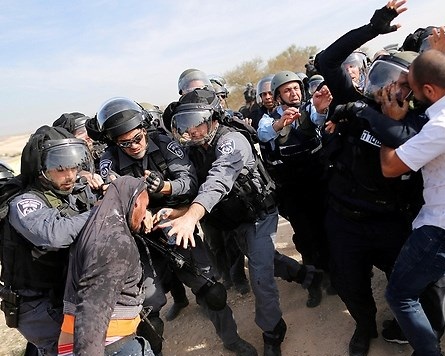 RNA - A new video filmed by Al Jazeera has contradicted claims by Israeli officials concerning the killing of Bedouin teacher Yaqoub Moussa Abu al-Qian, a math teacher who was shot dead by Israeli police last month during violent demolition raids in the village of Umm al-Hiran in the Negev, according to a report released by Israeli paper Haaretz on Thursday.

In one of several contested claims by Israeli police over the circumstances of the killing, the police and Israeli Public Security Minister Gilad Erdan claimed that al-Qian was driving toward police without his headlights on.

However, the new video released shows clearly that al-Qian did indeed have his headlights on before his car rammed into a group of police, killing one.

The Joint List, which represents parties led by Palestinian citizens of Israel in Israel’s parliament, the Knesset, were quick to accuse Israeli police of spreading misinformation on Israeli media following the incident.

In a statement released by the Joint List at the time, the group argued that Israeli police lied in their claims in order to distract from Israel’s campaign to establish Jewish-only towns "on the ruins of Bedouin villages.

”Israeli police spokesperson Micky Rosenfeld said that during a raid of the slain Palestinian's home, police found three copies of a Hebrew-language newspaper from 2015 with the headline: "Isis bomb that took down a plane," suggesting that the old newspapers were evidence that the man carried out a terror attack.

However, according to Haaretz, the Shin Bet, Israel’s internal security agency, reported two weeks after the incident that they had yet to find any evidence connecting al-Qian to ISIS.

Meanwhile, numerous eyewitnesses reported that Israeli police fired at Abu al-Qian, while he was driving, which caused him to spin out of control and crash into Israeli officers. Family members also firmly denied Abu al-Qian intended to carry out an attack.

Israeli police footage published last month by Haaretz, which they said was most likely from a police a helicopter hovering above the scene, appeared to show police officers shooting at al-Qian as he was driving at a very slow pace, and only several seconds after the gunfire does his car appear to speed up, eventfully plowing through police officers, raising questions on whether the incident was intentional or the result of Israeli gunfire.

According to Israeli paper, Haaretz, the incident has continued to be investigated by Israel's Justice Ministry.

Umm al-Hiran is one of 35 Bedouin villages considered “unrecognized” by the Israeli regime, and more than half of the approximately 160,000 Negev Bedouins reside in unrecognized villages.

The unrecognized Bedouin villages were established in the Negev soon after the 1948 Arab-Israeli war following the creation of the regime of Israel. Now more than 60 years later, the villages have yet to be recognized by Israel and live under constant threats of demolition and forcible removal.

The Joint List have described the actions by Israeli authorities as "a terrorist and bloody invasion that brings to mind the scenes of displacement and destruction of Arab villages during the Nakba in 1948." Some 750,000 Palestinians were forcibly displaced during the creation of the regime of Israel in what Palestinians call the Nakba -- “catastrophe” in Arabic.

Tags: Israel Palestine
Short Link rasanews.ir/201n6s
Share
0
Please type in your comments in English.
The comments that contain insults or libel to individuals, ethnicities, or contradictions with the laws of the country and religious teachings will not be disclosed