Saudis and Israelis behind new US sanctions against Iran

Rasa - Saudis and Israelis are pushing the administration of US President Donald Trump to punish Iran over its missile defense program, American historian and investigative journalist Gareth Porter says. 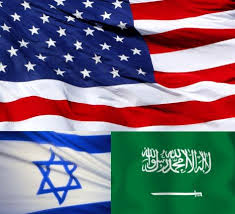 RNA - On Friday, the Trump administration imposed new sanctions on multiple Iranian individuals and entities to ratchet up pressure on Iran over its missile defense program.

The US Treasury Department said in a statement on Friday that it has published a list of 13 Iranian figures and 12 entities facing new sanctions.

According to the statement, the entities include companies based in Tehran, the United Arab Emirates, Lebanon and China.

Porter told Press TV on Friday that the imposition of sanctions against Iran is “violation of the United Nations Security Council” Resolution 2231.

Resolution 2231 was adopted on July 20, 2015 to endorse the nuclear deal between Iran and the P5+1 group of countries, including the US, known as the Joint Comprehensive Plan of Action (JCPOA).

Porter said that “Saudis are pushing the United States to put the maximum amount of pressure on Iran because Saudis don’t want Iran to have any deterrent.”

“It’s not just Israel, it’s the Saudis who are pressing the United States government to prevent Iran from having a missile program, to inhibit it as much as possible, to slow it down,” he noted.

The new sanctions came a day after President Trump said "nothing is off the table" in terms of a response to Iran's latest ballistic missile test.

Trump also said on Thursday that the White House has formally put Tehran "on notice" over its missile test.

Washington has said Sunday’s ballistic missile test was in violation of the 2015 nuclear deal between Iran and the P5+1 group of countries.

Tags: US Iran Israel Saudi
Short Link rasanews.ir/201n6m
Share
0
Please type in your comments in English.
The comments that contain insults or libel to individuals, ethnicities, or contradictions with the laws of the country and religious teachings will not be disclosed