Rasa - The administration of US President Donald Trump has imposed new sanctions on multiple Iranian individuals and entities to ratchet up pressure on Iran over its missile defense program. 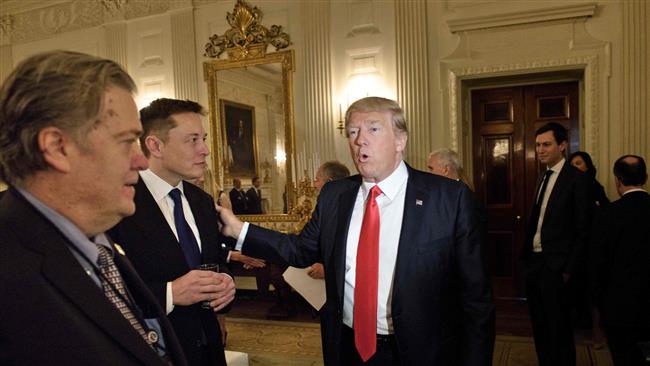 RNA - The US Treasury Department said in a statement on Friday that it has published a list of 13 Iranian figures and 12 entities facing new sanctions.

According to the statement, the entities include companies based in Tehran, the United Arab Emirates, Lebanon and China.

Senior US administration officials told Reuters that sanctions imposed against Iran were only the "initial steps in response to Iranian provocative behavior."

"Today's action is part of Treasury's ongoing efforts to counter Iranian malign activity abroad that is outside the scope of the JCPOA," the Treasury said in the statement, referring to the Iran nuclear deal reached between the Islamic Republic and the P5+1 group of countries, including Washington, in 2015.

Iran and the five permanent members of the UN Security Council -- the United States, Britain, Russia, China, France as well as Germany – reached a landmark nuclear agreement last year, under which Tehran agreed to limit some aspects of its nuclear program in exchange for the removal of nuclear-related sanctions. The two sides began implementing the deal, dubbed the Joint Comprehensive Plan of Action (JCPOA), on January 16.

The new sanctions came a day after President Trump said "nothing is off the table" in terms of a response to Iran's latest ballistic missile test.

Trump also said on Thursday that the White House has formally put Tehran "on notice" over its missile test.

“Iran has been formally PUT ON NOTICE for firing a ballistic missile. Should have been thankful for the terrible deal the U.S. made with them!” Trump tweeted, echoing his national security adviser’s comments a day earlier.

On Friday morning, Trump accused Iran of “playing with fire.”

"Iran is playing with fire -- they don’t appreciate how ‘kind’ President Obama was to them. Not me!," Trump tweeted.

In response, Iranian Foreign Minister Mohammad Javad Zarif said Tehran is “unmoved” by the Trump administration’s threats and only relies on its own defense means.

“We will never initiate war, but we can only rely on our own means of defense,” the foreign minister pointed out.

Washington has said Sunday’s ballistic missile test was in violation of the 2015 nuclear deal between Iran and the P5+1 group of countries.

Tags: US Iran Trump sanction
Short Link rasanews.ir/201n6j
Share
0
Please type in your comments in English.
The comments that contain insults or libel to individuals, ethnicities, or contradictions with the laws of the country and religious teachings will not be disclosed