Rasa - New polls show that half of the people in Russia are opposed to the current ban on wearing headscarves in schools. 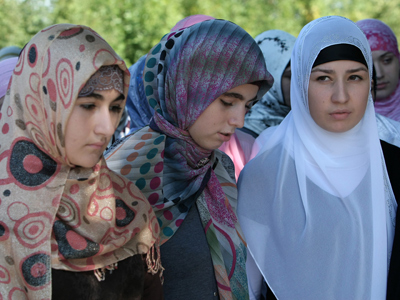 RNA - Based on a recent survey by the Russian Public Opinion Research Center, one in two supported lifting the ban while 37 percent believed it was “impossible” to do.

Low level of awareness of other ethnic and religious groups was a key factor underlying social distrust in Russia, Elena Mikhailova, director of special programs at the center, said.

In recent years, there had been an increase in acceptance of other religious groups, Mikhailova said according to the TASS news agency.

She said elements such as the hijab had become “more understandable and familiar”, particularly among young people who paid less attention to appearance.

The poll was conducted on28 and 29 of January and questioned 1,800 people in 48 provinces.

In 2015, the Supreme Court upheld a ban on pupils wearing the hijab in schools after the Muslim Tatar community in Mordovia -- a republic 560 kilometers (350 miles) southeast of Moscow -- appealed a ban imposed a year earlier.

Tags: Muslim Hijab Headscarf
Short Link rasanews.ir/201n63
Share
0
Please type in your comments in English.
The comments that contain insults or libel to individuals, ethnicities, or contradictions with the laws of the country and religious teachings will not be disclosed