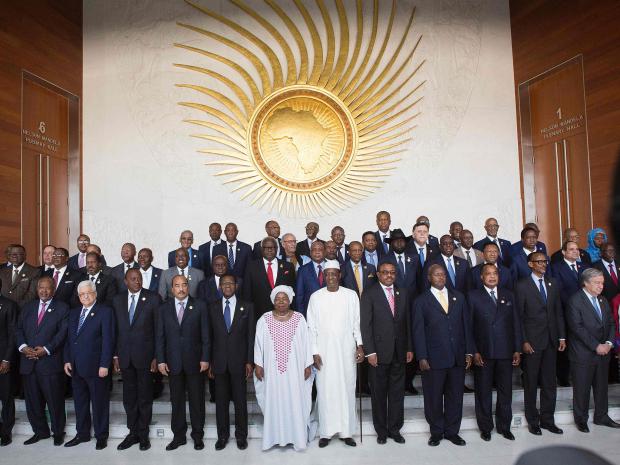 Two members of the Union, Somali and Sudan were affected by the executive order signed by Trump on Friday. Libya. Iran, Iraq, Syria, Yemen are also on the list.

President Alpha Conde of Guinea, who was elected new chairman of the African Union, expressed solidarity with Somali and Sudan.

Conde said the summit "showed the solidarity spirit of the continent to the world."

During the session, Chad’s Foreign Minister Moussa Faki Mahamat was elected to replace Nkosazana Dlamini-Zuma, who stepped down after four years at the helm of the African Union Commission. And Ghana’s Ambassador Thomas Kwesi Quartey was elected deputy chairperson.

Dlamini-Zuma condemned the ban as racist act on his Twitter account, saying “the very country to whom our people were taken as slaves have now decided to ban refugees from some of our countries.”

Dlamini-Zuma had expressed concern about Trump's presidency, saying it "could affect the global advances made in the fight for gender equality, as well as combatting climate change".

The session was also affected by reports that Morocco's readmission to the union may divide the union. Morocco was readmitted to the African Union on Monday following an absence of more than three decades.

In 1984, Morocco left the Organization of African Unity, the predecessor of the AU, after the union formally recognized the Saharawi Arab Democratic Republic in the Western Sahara region, which Rabat considers Moroccan territory.

Tags: Muslim US africa
Short Link rasanews.ir/201n61
Share
0
Please type in your comments in English.
The comments that contain insults or libel to individuals, ethnicities, or contradictions with the laws of the country and religious teachings will not be disclosed