Judge orders that stranded Yemenis be allowed to enter US

Rasa - A federal judge in Los Angeles has issued an order to bar the Trump administration from preventing a group of Yemenis with valid visas from flying to the United States. 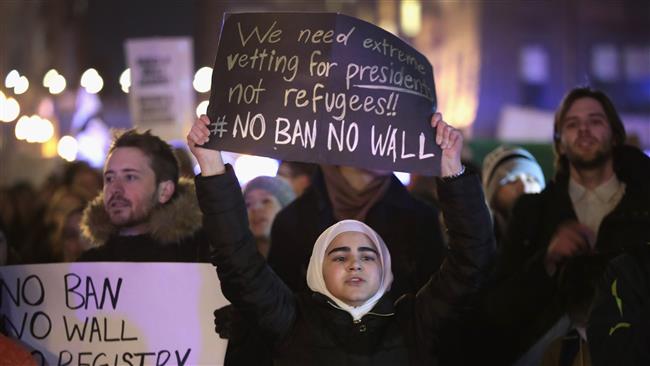 RNA - In yet another challenge to President Donald Trump's ban on Muslims, US District Judge Andre Birotte Jr. on Tuesday night granted a temporary restraining order against the controversial presidential executive order after an emergency motion on behalf of 28 Yemenis was filed.

The motion was submitted by immigration attorney Julie Goldberg and her associate Daniel Covarrubias-Klein on behalf of the plaintiffs.

The Yemenis are stranded in the tiny African nation of Djibouti, where they were transiting on their way to the United States. They are affected by Trump’s immigration directive, which was issued last Friday.

Under Trump’s order, citizens of Iran, Iraq, Syria, Yemen, Sudan, Libya and Somalia are banned from entering the US for at least 90 days while Syrian refugees are blocked indefinitely. All refugee admissions are also halted for 120 days.

Goldberg said on Wednesday her more than 200 Yemeni clients have been affected by the travel ban and who are now stranded in Djibouti.

She added that the US embassy in Djibouti has canceled visa appointments for another 1,000 people, most of them from Yemen and Somalia. They are also stranded.

"These are people escaping war, I have people who are injured, people who aren't getting proper medical care, children that have died," said the attorney by telephone, who is currently in Djibouti.

"These are the women and children of US citizens and I need to get that message across," she added.

"How is banning a three-year-old child preventing terrorism from happening in the US? I just need to know,” she noted.

Many of the stranded Yemenis in Djibouti have expressed frustration over their conditions, saying that they are running out of money and that they cannot return home fearing for their lives.

The US embassy in Djibouti has posted an online notice, telling the citizens of the seven countries affected by Trump’s order and those with dual nationalities not to schedule visa appointments or even attend existing visa appointments.

In the wake of Trump's order, many US colleges are advising international students from the seven banned countries not to leave the United States.

Tags: Muslim Trump protest
Short Link rasanews.ir/201n5v
Share
0
Please type in your comments in English.
The comments that contain insults or libel to individuals, ethnicities, or contradictions with the laws of the country and religious teachings will not be disclosed