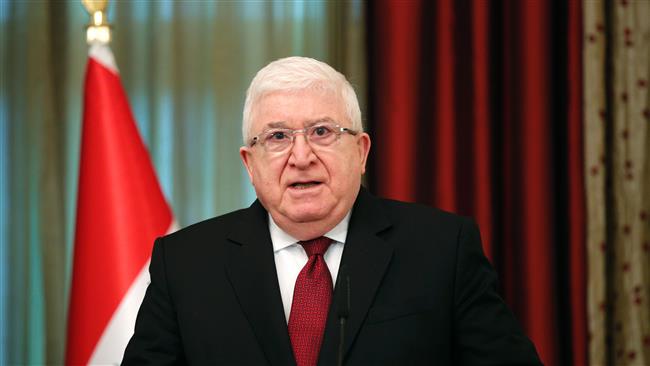 RNA - The Iraqi president on Wednesday reminded Trump that many Iraqis had sacrificed their lives in the fight against terrorism on behalf of countries such as the United States.

Trump ordered last week a 90-day ban on the entry of citizens from Iran, Iraq, Syria, Libya, Somalia, Sudan and Yemen. The measure, which triggered demonstrations inside the United States, also suspended the entry of all refugees for 120 days and barred Syrian refugees indefinitely.

The new US president claims the move is aimed at making America safer in the face of increasing threats from terrorist groups.

President Masum called on Trump "to be just to people fighting terrorism with the blood of their sons and their resources on behalf of the whole world, including the United States."

The Iraqi military has been at the forefront of the fight against Daesh, a Takfiri terrorist group which seized territories in the Arab country three years ago. Iraqi forces have managed to repel terrorists from major urban centers and the battle now continues in the second largest city of Mosul.

On Tuesday, Prime Minister Abadi said Trump had effectively punished "people who are sacrificing, who are fighting terrorism."

The Iraqi parliament has also ratified a bill that would enable the government to reciprocate and ban US nationals from entering Iraq if Washington does not change course.

Reports emerged of continued chaos in airports around the world on Wednesday in the wake of Trump's ban.

Hundreds of Yemeni nationals have been stranded in Djibouti, with an American lawyer speaking from the tiny African state saying the Yemenis had US visas but could not travel to the United States due to the ban.

"These are all the children, parents and the spouses of US citizens," Julie Goldberg said, adding that more than half of the more than 200 Yemenis stranded in Djibouti are children.

The lawyer said she was seeking an airline that would comply with a court order dated Tuesday from the US District Court in California's central district, which urged a halt to the enforcement of Trump's ban and instructed officials to allow Yemenis to fly to the United States.

Yemenis stranded in Djibouti are part of a larger population of expatriates displaced by the war in Yemen. The impoverished Arab country has suffered about two years of constant bombardment by Saudi Arabia. More than 11,400 have been killed in the carnage.

Tags: Muslim Fuad Masum Trump Iraq
Short Link rasanews.ir/201n5j
Share
0
Please type in your comments in English.
The comments that contain insults or libel to individuals, ethnicities, or contradictions with the laws of the country and religious teachings will not be disclosed