Less than one-third of Americans believe US President Donald Trump’s travel ban targeting seven Muslim-majority countries makes them "more safe," a new poll shows, despite Trump’s claim that the move would help protect the US from terrorism. 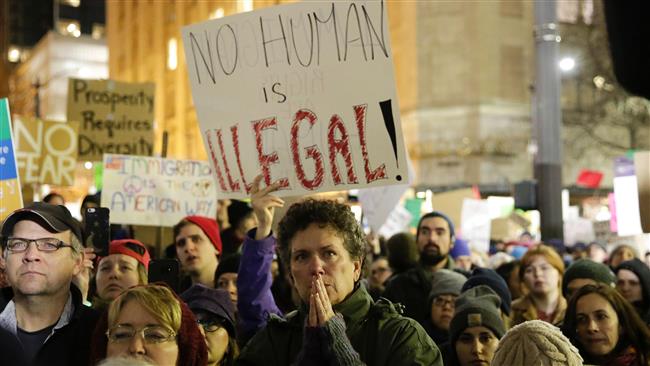 RNA - Some 31 percent of people said the travel ban made them feel "more safe," while 26 percent said it made them feel "less safe," according to the Reuters/Ipsos opinion poll released on Tuesday.

Another 33 percent said it would not make any difference and the rest said they don't know, according to the survey, taken on January 30-31.

Trump signed an executive order on Friday that imposed a temporary travel ban on citizens from Iran, Iraq, Libya, Somalia, Sudan, Syria and Yemen and placed an indefinite ban on Syrian refugees. The move also suspends admission of all refugees for 120 days.

Trump has come under immense pressure from politicians and rights groups to rescind the ban. Protests have also been held inside and outside the US.

On Tuesday, thousands of protesters gathered in downtown Minneapolis, Minnesota, as well as Columbia, South Carolina, to voice their anger at the controversial immigration order.

Some lawmakers from Trump’s own Republican Party criticized the order and said it could backfire by giving terrorist groups a new recruitment message.

"This executive order sends a signal, intended or not, that America does not want Muslims coming into our country," senators John McCain of Arizona and Lindsey Graham of South Carolina said in a joint statement.

The move has also provoked a global backlash, including criticism from American allies who view the move as discriminatory.

Tags: Muslim US Islam Trump
Short Link rasanews.ir/201n5i
Share
0
Please type in your comments in English.
The comments that contain insults or libel to individuals, ethnicities, or contradictions with the laws of the country and religious teachings will not be disclosed