Rasa - People continue to hold rallies in cities across the United States in protest at President Donald Trump’s executive order shutting the nation’s doors to immigrants and refugees from seven predominantly Muslim countries. 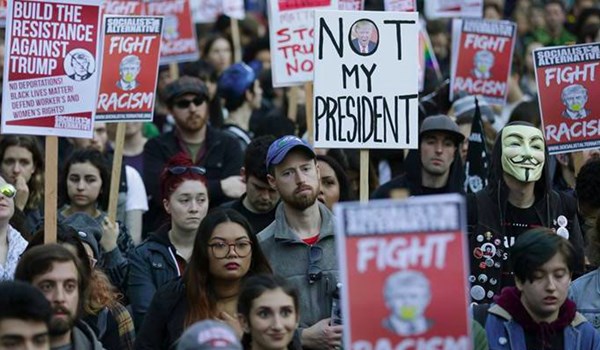 RNA - Thousands gathered in downtown Minneapolis, Minnesota, on Tuesday to voice their anger at the controversial immigration order.

It was the second large demonstration in the Twin Cities after a protest at St. Paul International Airport drew some 1,500 demonstrators over the weekend.

The event started in front of the federal courthouse late in the afternoon and swelled to include at least 5,000 protesters by the time they began marching.

“President Trump is trying to punish cities,” Hodges told the crowd, referring to the president’s threats to withdraw federal funding from cities. “Not on my watch,” the mayor added.

"We will stand on our principles and we know we can do it because you are standing here with us," she said.

Amid calls of “We must resist,” Hussein, executive director of the Minnesota chapter of CAIR, promised that the Muslim advocacy group would file lawsuits against the Trump administration.

Elsewhere in the US, hundreds of people gathered at the South Carolina Statehouse in Columbia to protest Trump's immigration policy.

“Say it loud, say it clear, 'Refugees are welcome here,’” protesters chanted as they carried signs reading, "Refugees welcome," and "Let them in."

The rallies come as three states are taking legal action against the Trump administration over the travel restrictions. The challenges put up by Massachusetts, New York, and Virginia argue that the ban violates the US Constitution.

Under Trump’s order issued on Friday, citizens of Iran, Iraq, Syria, Yemen, Sudan, Libya and Somalia are banned from entering the US for at least 90 days while Syrian refugees are blocked indefinitely. All refugee admissions are also halted for 120 days.

In the wake of that order, many US colleges, including those in South Carolina, are advising international students from the seven banned countries not to leave the United States.

The European Union labeled the Trump administration a "threat" on Tuesday, setting the stage for more tensions between the US and the EU.

“The change in Washington puts the European Union in a difficult situation; with the new administration seeming to put into question the last 70 years of American foreign policy,” Tusk said in a letter to EU members.

The White House has disputed the criticism that Trump’s executive order constitutes a “Muslim ban” or even “a travel ban.”

Tags: Muslim US Rally Trump
Short Link rasanews.ir/201n5d
Share
0
Please type in your comments in English.
The comments that contain insults or libel to individuals, ethnicities, or contradictions with the laws of the country and religious teachings will not be disclosed