Rasa - Scores of demonstrators took to the streets in Bahrain in a show of solidarity with political prisoners, and to express their outrage over the ruling Al-Khalifa regime’s brutal clampdown on pro-democracy campaigners in the kingdom. 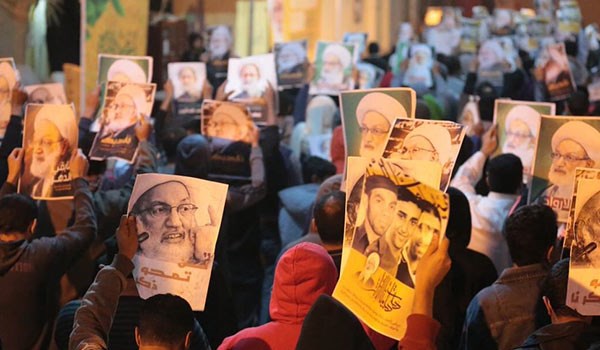 RNA - The protesters staged a rally in the village of Ma’ameer, situated about 15 kilometers South of the capital Manama, carrying Bahrain’s national flags as well as banners in condemnation of the recent execution of three Shia activists, presstv reported.

On January 15, Bahrain executed Abbas al-Samea, 27, Sami Mushaima, 42, and Ali al-Singace, 21, by firing squad after the three were found guilty of having a role in a deadly bomb attack in 2014.

The marchers further voiced their unwavering support for prominent Shia cleric Sheikh Issa Qassim, whose nationality has been revoked and whom Bahraini authorities seek to put on trial.

The Manama regime has pressed charges of “illegal fund collections, money laundering and helping terrorism” against the 79-year-old cleric, who has strongly rejected them.

Bahraini authorities stripped Sheikh Qassim, who is the spiritual leader of the dissolved main opposition group al-Wefaq National Islamic Society, of his nationality on June 20, 2016.

They later dissolved the Islamic Enlightenment Institution, founded by the clergyman, in addition to the opposition al-Risala Islamic Association.

Thousands of anti-regime protesters have held demonstrations in Bahrain on an almost daily basis ever since a popular uprising began in the kingdom in February 2011. They are demanding that the Al-Khalifa dynasty relinquish power and a just system representing all Bahrainis be established.

Tags: protest bahrain
Short Link rasanews.ir/201n5U
Share
0
Please type in your comments in English.
The comments that contain insults or libel to individuals, ethnicities, or contradictions with the laws of the country and religious teachings will not be disclosed