Rasa - Police are investigating flyers with the words “Ban Islam from America” posted at the site of a planned mosque, the Islamic Center of Mukilteo. 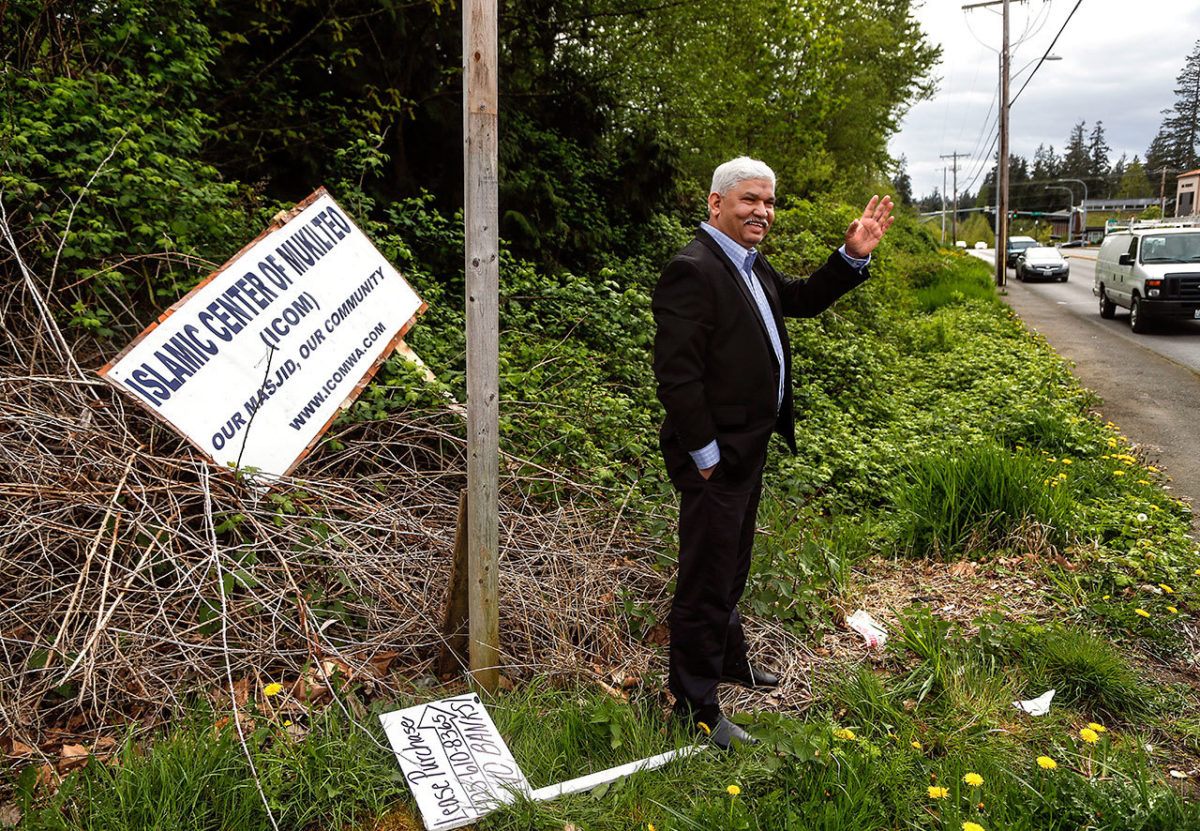 RNA - Police are investigating flyers with the words “Ban Islam from America” posted at the site of a planned mosque, the Islamic Center of Mukilteo.

A U.S. flag was placed nearby.

The flyers had about six paragraphs of “anti-Islamic rhetoric,” said Mukilteo police officer Myron Travis. The flyers were attached to a sign that has been posted on property at 3920 Harbour Pointe Blvd. announcing it as the site of the planned mosque. The mosque’s sign also was damaged.

Police are investigating the incident as possible malicious harassment, which can be charged as a felony. Police collected the signs and the flag as potential evidence.

The vandalism was reported by an anonymous caller Thursday afternoon.

“I don’t think that represents Mukilteo,” she said.

Gregerson said she thinks the mosque is opposed by a small group of people. There are others who have questions or are unaware about the Islamic faith, she said.

“My community values diversity,” she said. “Mukilteo is a place for everyone.”

Mary Ellen Wood, executive director of the Everett-based Interfaith Association of Northwest Washington, said she was disheartened and frustrated to hear about the defacing of a sign and leaving of anti-Muslim materials at the planned mosque site.

“What does it say about the person or persons who did this cowardly, fearful act to think that pairing hatred and fear with a U.S. flag represents the local majority in our area?” she said. “I must believe this does not represent the majority in our local communities.”

The group previously announced plans to schedule interfaith suppers. In addition, she said she hopes that the faith community will gather on a yet to be determined date “in prayer, meditation or simple silence to stand together in response to this hatred.”

Mohammed Riaz Khan, president of the mosque, said he saw the flyers attached to the mosque sign Thursday.

Khan said he is working with local religious groups to schedule a public meeting by the end of the month so that people who have questions about the mosque can get answers.

“We want peace and prosperity,” he said. “We shouldn’t hate each other. We should love each other.”

Khan met with Congressman Rick Larsen on Monday afternoon to discuss the mosque and has traded phone messages with Gov. Jay Inslee. Jaime Smith, the governor’s communications director, said she did not know if the two men planned to meet or speak again in the near future.

Plans for the mosque were first announced in 2013. Last year, Khan and other mosque supporters organized a Community Day at Harbour Pointe Middle School to bring together people of all faiths and to provide opportunities to tour the site of the planned mosque.

Plans submitted to the city call for a 3,796-square-foot, two-story building with space for a prayer area, multi-purpose room, two small offices, a kitchen, bathrooms and two classrooms.

The posting of flyers with anti-Islamic sentiment is the latest in a controversy involving the mosque. Last month, an anonymous postcard was mailed citywide, calling attention to plans for the mosque. It was sent by somebody with the email address: mukilteostaysafe@gmail.com.

Peter Zieve, who leads the aerospace firm Electroimpact Inc., first denied knowing about it, then later admitted that he was behind the mailing.

In an April 29 letter to the Mukilteo Beacon, Zieve said he regretted sending the postcards, and that he reacted in fear “to recent world events involving radical Islam.”

Last month, Khan called on Zieve to publicly apologize for his opposition to the mosque through a citywide postcard mailing. On Monday, Khan said that remains his position.

The city of Mukilteo has set a deadline of May 20 for public comment on plans for the mosque. So far, the city has received about 15 comments, said Glen Pickus, a planning manager for the city. Once the comment period ends, the planning department will send a letter to the applicants with comments on the submitted plans and any corrections they have to make or additional information they have to provide under the city’s building codes, he said.

Tags: Muslim Mosque Islam Vandalize
Short Link rasanews.ir/201mre
Share
0
Please type in your comments in English.
The comments that contain insults or libel to individuals, ethnicities, or contradictions with the laws of the country and religious teachings will not be disclosed