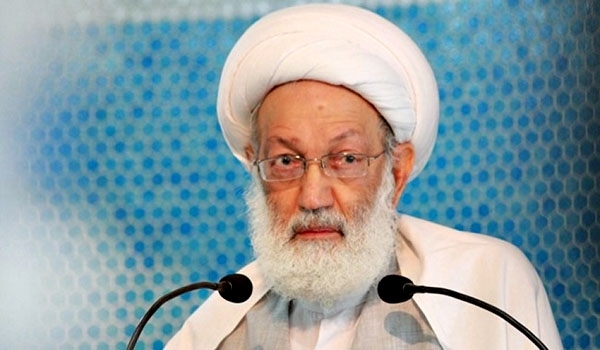 RNA - "The Bahraini regime wants to send a message to its allies, that it is able to control the tiny Gulf kingdom as it tried to test its control today by trying to arrest Sheikh Isa Qassim," Fairooz said, Al Ahed reported.

However, the regime "failed in fulfilling its aims" as it was confronted with a popular uprising, he added.

The former MP went on to say that the Al Khalifa regime "plans to arrest Sheikh Qassim" but "it is closely monitoring the internal and regional situation, in the light of the Saudi alliance being blamed for the situation in Iraq, Syria and Yemen, so it aims to be more cautious in dealing with this internal incident."

Fairooz explained that the regime is "plotting for something" which it will implement by the end of this month and the beginning of January as the final verdict on Sheikh Qassim's "charade trials" will be upheld.

"The regime is taking advantage of the holiday season when the West is absent and busy with Christmas to cook-up something for the coming stage," the ex-MP indicated.

Fairooz believed that the Al Khalifa regime "wants to crush the democratic popular mobilization of the Bahraini people and to detain and totally eliminate popular opposition leaders headed by Sheikh Isa Qassim," in a bid to pave the way to stir thing up in the Gulf Kingdom in "the absence of any popular mobilization".

The former MP concluded that "What happened Wednesday morning is the best example of what the Bahraini people can do," adding that Bahrainis flooded Diraz from different cities and villages.

"The residents of Diraz gathered in the cordoned area and confronted the regime forces forcing them to push back and retreat," he concluded.

Scores of people had been killed and hundreds of others injured or arrested in the Bahraini crackdown on the anti-regime activists.

Tags: Sheikh Isa Qassim bahrain
Short Link rasanews.ir/201mo0
Share
0
Please type in your comments in English.
The comments that contain insults or libel to individuals, ethnicities, or contradictions with the laws of the country and religious teachings will not be disclosed