Rasa - Secretary of Iran's Supreme National Security Council (SNSC) Ali Shamkhani underlined that the UN Security Council's resolution to deploy UN observers to Aleppo to monitor evacuations is useless and ignores dispatch of humanitarian aid to people who are besieged by the terrorists. 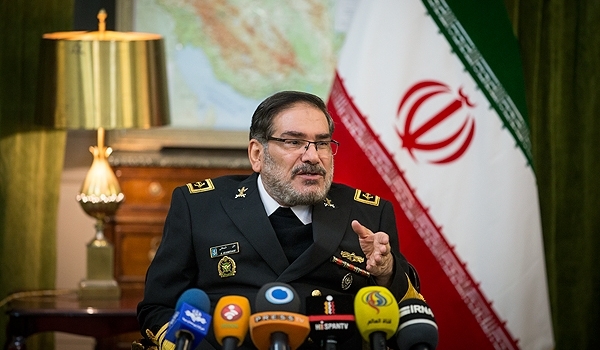 RNA - "Approval of the UNSC's Resolution 2328 last night was a move to continue the past destructive measures and paves the ground for the intelligence and military agents of the countries which support terrorism to enter Aleppo in disguise as observers," Shamkhani told reporters in Tehran on Tuesday.

"In this resolution, no role has been foreseen for the legal Syrian government and only the issue of safe evacuation of militants from Aleppo has been paid attention instead of prioritizing the issue of aiding the people who are under the terrorists' siege in Syria," he added.

Shamkhani underscored Iran's firm determination to continue fight against terrorism and support the legal Syrian government in cooperation with Moscow, and said, "Russia has been our ally in fighting against terrorism and it has well shined in this arena in both political and military fields."

The UN Security Council unanimously passed a resolution requiring the monitoring of evacuations from Aleppo.

However, Moscow and Paris came to an agreement on the text after more than three hours of closed-door consultations by the Council on Sunday.

The resolution asked UN Secretary-General Ban Ki-moon “to take urgent steps to make arrangements, including security arrangements in consultation with interested parties, to allow the observation by the United Nations and other relevant institutions of the well-being of civilians… inside the eastern districts of the city of Aleppo.”

Tags: Iran Syria Ali Shamkhani Aleppo
Short Link rasanews.ir/201mnd
Share
0
Please type in your comments in English.
The comments that contain insults or libel to individuals, ethnicities, or contradictions with the laws of the country and religious teachings will not be disclosed