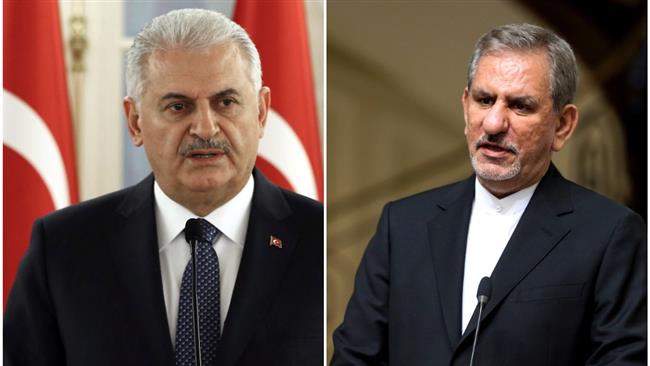 RNA - Jahangiri made the remarks in a phone conversation with Turkish Prime Minister Binali Yildirim on Friday.

“With the help of each other, [we] have to prevent an increase in killing and bloodshed in the region, including in Syria, and make efforts to save civilians trapped and besieged in different regions across the country,” he said.

Jahangiri also called for the swift delivery of relief aid to Syria, saying, “The Islamic Republic of Iran has been ready for the dispatch of humanitarian aid to Syria since yesterday (Thursday).”

He further expressed hope that that Iranian and Turkish political officials could in through cooperation  "take serious steps toward settling Syria’s issues diplomatically.”

“Regional issues can be resolved more quickly through the expansion of cooperation and growth in coordination between Iran and Turkey,” the Iranian official added.

Turkey’s security and stability is important for Iran, Jahangiri said, called for cooperation and mutual assistance in the fight against extremism and terrorism.

Yildirim, for his part, said the humanitarian situation in eastern Aleppo is alarming and his country is ready to do its best for civilians there, according to an informed source at the Turkish prime ministry.

On Thursday, Syria announced the liberation of Aleppo from the grip of foreign-backed terrorists as the evacuation of civilians and militants from the militant-held eastern part of the city was taking place. However, the process has come to a halt due to terrorists opening fire on a convoy at one of the crossing points.

The source further cited the premier as saying that Turkey is willing to cooperate with Iran to evacuate civilians from eastern Aleppo and provide humanitarian aid to those in need in the region.

Iran-Turkey cooperation is important both in Iraq and Syria as they are influential states capable of foiling plots hatched for the region, Yildirim said.

Touching on Jahangiri's upcoming visit to Turkey, he said bilateral and regional ties will be discussed in the trip.

Tags: Turkey Iran Syria Aleppo
Short Link rasanews.ir/201mmJ
Share
0
Please type in your comments in English.
The comments that contain insults or libel to individuals, ethnicities, or contradictions with the laws of the country and religious teachings will not be disclosed